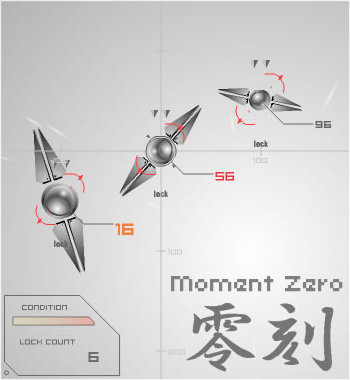 This time a Flash shmup from Uminin of the Flash Game Zone in Japan. Moment Zero is a mostly grayscale shooter of exceptional design. Noteworthy features include a lock-on targeting mechanism and multiple paths through the game.

Understanding the locking mechanism is key to getting higher scores, since the number of locks indicated becomes the score multiplier for enemies targeted in red lock state. At several junctures along the way, the path of the game diverges and your score determines the route you take. Open map.

Control is with the mouse for targeting as noted above, and the space bar is used for firing. All targets locked-on are fired upon with once press of the space bar. You can press [B] to cancel locks targeted. This may be useful since later enemies will fire at you when you lock-on them. By canceling targeting, you can therefore aim at only the shots fired at you and rack up more points by repeating the process.

I believe the translated name comes from the fact that once a lock is established, the distance to the target is displayed. As enemies close in, that number approaches zero. If you are unsuccessful in destroying the target before the target distance reaches zero, you will take damage at that moment. Hence, Moment Zero.

While this is certainly not the first game to utilize a targeting mechanism, Uminin's implementation is nicely done and integrates well with the design of the game. Add to that a solid game engine that features lots of enemies and multiple paths through the game. Another fine example of exceptional Flash game design coming from Japan. Click.

Jay, a question--do you get more points awarded the closer the targets are? I can't figure out how to reach the minimum scores to go to the left path of the map, and pulling off x8 combos doesn't seem to work in the initial section.

Nick - range to target does not affect the score, but the number of locks established does.

I believe you're going to have to try 'playing' with the more difficult enemies that take quite a few hits to take down. Use the [B] button to cancel locks on anything but the missiles they fire at you, thereby racking up points in the process.

a very fun game!!!
hard too, when i had a bunch of other windows open.
good originality
i got a level 8 but ill see what i can doo
363260 points, second try
lots of fun jay

By the end map it looks like there are different paths that are able to be taken dependant on how many points you have when you reach the intersections. Is this correct? I'm just not good enough to hit those point peaks and don't have the patience to sit with one enemy.

Paul: Yes. I've managed to get to all three endpoints after Jay's explanation. As it turns out, you don't need to spend ages sitting shooting one enemy's bullets, either. For example, in the first run, when the larger enemy ships appear (the ones that shoot two bullets at a time), simply max lock it and shoot, then lock on its bullets and max lock the main ship again before shooting. You'll destroy the ship and get something like 1700 x 10 points.

The key is that you get the multiplier in the ORDER that you made the locks. If you max lock onto a 1,000 pt. ship and then the bullets, you'll get 1000 x 8 and each bullet 10 x 10. You get MANY more points if you lock onto the ship LAST. So get your last lock on the ships, not the bullets, and you should cruise all the way on the left side.

Level 20! oh yeah,,, great game; the music keeps you going for sure

Just something interesting that I noticed while giving this game a whirl: the song playing is "Zero-One," from Konami's beatmania series of games...I think it's from Beatmania IIDX 7th Style, but I'm not 100% positive.

A good way to get points is to target the bullets fired first AND THEN the ship.s The points only offer 10 points. 9x10 is almost not even worth getting. But 9x1000 is alot better then 5x1000 and 9x10.

ZK, you're dead on. It is Zero-One from IIDX 7th style

anyone know where i can find a html link for it ?

if you like stylish jap games try Ikaruga for Gamecube or Dreamcast.

HTML link? Click the words "Moment Zero" in the content of the review. The first time a game name is mentioned in our reviews will be where you can find the HTML link to the game.

how are you guys getting to the other side so easy! its so hard!

I think this was the one of the first games that I ever played on your site, Jay. I really enjoyed it, but I've only played a few times since then.

Anyone still here? I have some questions about the game and the locking system...

I can't seem to lock on the bullets last when fighting the bigger ships. The cursor is so wide that whenever I try to just shoot the bullets alone, I end up hitting the ship as well! What gives?

Is it always possible to hit the bullets first? I keep on trying to go from bullet to ship but I'm not having much success (and not just with the big ships too)