Despite what they say, in short bursts war can be exceptionally fun. For proof, check out Matthew Hydman's 10 Second War, a unique little topdown puzzle shooter game with a time-bending main mechanic. You play as a little squad of soldiers tasked with eliminating the opposing turrets and bots, but you only have ten seconds to get the job done. Fortunately, you get to select each unit individually and control them with the [WASD] keys and your mouse through the ten second span, and then hit [F] to "finish" the unit. Then you can do it all again with the next guy, creating a tiny little ballet of violence as your previous soldiers go about their choreography. A robust level editor gives the game some great replayability but be warned: you might find yourself playing each level ten or tweny times trying to perfect each shot and dodge for maximum efficiency. 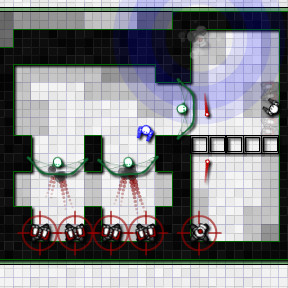 The controls on 10 Second War feel a tad slippery. That's not really a factor since you get to replay each soldier as many times as you want, but it could use a little tightening. This isn't a game about "winning" so much as "perfecting"; it's easy enough to take one guy and have him Rambo his way through the whole opposition in one go, but that won't score you high marks and it just doesn't look cool. The real satisfaction comes in carefully plotting out the path of each unit so that they eliminate their foes with maximum flair, dropping each baddie before they can even get a shot off. And as mentioned, the level editor is great fun, and the player-created levels should keep you occupied for many coffee breaks to come. A rollicking soundtrack by DST and some sparse but charming graphics make this a game to remember. So check out 10 Second War and prepare to be blown away in no time at all.

This is great. It reminds me a bit of N: Way of the Ninja, with the way it uses recordings of high scores as a walkthrough and motivation to improve. (Comparisons with N are a huge compliment.)

3,924 Views
0 Comments
chrpa— Jayisgames needs your help to continue providing quality content. Click for details The skilled investigator and his peculiar helper, after they breaked the curse in a small town and helped its inhabitants (Cursed Travels. Flame of the Banshee), arrived...  ...