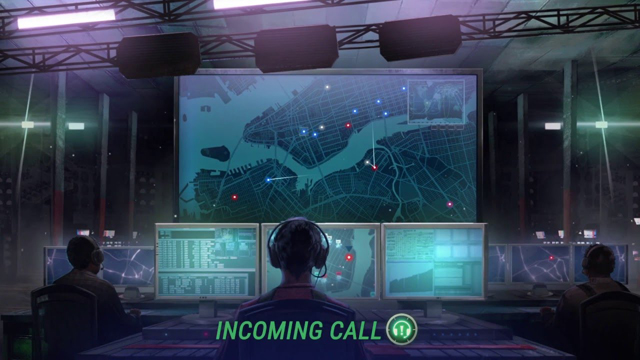 You're in a city of thousands with a small cache of emergency professionals at your disposal. A call comes in, a report, another call, a few more reports, and suddenly all your units are busy responding to other emergencies. A car accident, a robbery, a kitchen fire, an altercation in the street, an unconscious man on the sidewalk. Another call comes in and it's something worse: a serious industrial accident, the victim barely holding it together over the line. You look to your map and see the nearest ambulance is miles away. What do you do? What can you do?

911 Operator, an award-winning strategy game from Polish development team Jutsu Games, puts its players in just this situation repeatedly, unafraid to confront the hard realities and painstaking strategy necessary in first response. Successfully funded on Kickstarter over four times their goal and developed in tandem with real emergency professionals from around the world, the game asks you to take on the role of a 911 operator with a handful of emergency vehicles at your disposal, including fire, police, and medical. As you play through a round of active duty, each lasting about seven minutes, you'll be asked to manage both incident reports, which often include things like garbage fires, speeders, sprained ankles, and the like, to actual 911 calls, many for serious emergencies, which often put your first aid skills to the test. It's up to you to send the correct emergency aid to each incident or risk loss of life, either civilian or of your officers themselves.

Luckily, the game also has several informational cards that detail many of the important things you'd need to know in your job, from administering CPR to recognizing the signs of heart attack and stroke. The game is also at its best when played with headphones; many of the 911 calls require active and careful listening to help determine whether a greater threat is present or the call was made by mistake and can be ignored.

There is an impressive depth to 911 Operator that is consistently refreshing and surprising. While easier incidents may simply be a speeder in need of police interception or a broken leg in need of medical assistance, many of the actual 911 calls are far more difficult and robust than they first appear. Many robbery cases, for example, may also require medical assistance, many fires are more intense and consuming than they may first appear, requiring additional support to control the flames. Learning to navigate and predict is part of the crisp dance the game draws you into, one that's difficult to master but still absurdly rewarding as these beats slowly become second nature. A lot of people died in my first few hours, and I'm still a little ashamed by it, but somewhere around the second and third hour did I start to feel like I understood, like I was beginning to predict and juggle and manage in a way that helped save the most lives.

Strategy is also a key component to successful duty runs in 911 Operator. Players are expected to manage their teams completely on their own through a means similar to other simulation games, such as managing staff in Roller Coaster Tycoon, for example. Each employee, whether a police officer, fireman, or medic, has different stats that dictate their driving ability along with certain class-specific abilities, such as marksmanship for police officers and technical ability for fire officials. It follows that vehicles manned by drivers of higher skill move faster, for example, and in the game's most intense moments, many of these statistics are the very barrier between successfully responding to an emergency or failing and taking a significant penalty to your reputation. Players are also able to purchase equipment to help assist their field officials (e.g. bulletproof vests for police, first aid kits for all professionals), and through the money earned with each successfully completed active duty, players can also purchase additional vehicle types, such as police motorcycles and rescue helicopters, that help make it easier to more effectively respond to certain types of emergencies. But be warned: if your officials are injured during any round of active duty, they're put out of commission to rest and recover, unable to be used again until a certain number of active duty rounds have been completed. Risk is always extremely high in 911 Operator, but the payoff is often the most rewarding. Officials rank up over time, becoming more efficient at their duties and giving you the upper edge on keeping your city safe.

In all the hours that I spent with 911 Operator, I probably had the most fun in free play, where players can download maps of almost any city of their choosing through open source data. I downloaded and played several sessions in my hometown of Phoenix, Arizona, thinking somewhat mistakenly that its grid layout would make it more easy to quickly respond to emergencies. Even playing on easy, it was incredibly difficult to respond to every emergency because of simply how large the city is. But with each duty, even the ones I barely completed, came more funding with which to better prepare my team to respond. Progress, I found, is most satisfying in free play, while I tended to find myself playing a very similar game again and again during career mode, where I was never really want for money or supplies and was instead just continuously playing each map to earn enough reputation points to move on to the next one. But I cut my teeth on career mode and found something cathartic and enjoyable in repeated attempts at each map, and accidentally lost track of time by simply falling into a comfortable zone, always telling myself "just one more duty."

Repetitiveness is perhaps one of the few drawbacks to an otherwise well-designed and nuanced experience. I noticed that in career mode, I tended to hear the same or similar calls repeatedly, and I worry that some of my mastery came not from learning the ropes as much as it did from learning the calls and acting pre-emptively. To the game's credit, however, I was occasionally thrown for a loop when I'd begin to respond to a call I recognized, only for a small but crucial detail to change, leaving me kicking myself for having not stopped to listen instead of just reacting. I also had some trouble simply with the user interface during duty sessions, especially when it came to managing my active units. It's difficult to remember each individual unit by their number alone and I found myself frustrated occasionally when I couldn't figure out which of my police cars had a first aid kit on board, for example. These moments are generally few and far between and have less importance when new types of units come into play, but having more clarity to the UI still could have been useful in the thick of it, when units are limited and there are many emergencies to respond to.

What's perhaps most special about 911 Operator is simply its impressive balance of fun and education. Never once did I find myself not having fun, and even as I write this review now I find my thoughts wandering to when I can hop in for another round. There's still much of the game I have yet to master and I could easily see this being a source of tens, if not hundreds of hours of gameplay. I certainly hope the developers continue to support and nurture this wonderful little game as there is a great deal of potential for this game to be incredibly important to the emergency services industry, not only in the use of training new operators but also educating the public at large as to what real emergencies look and feel like so as to spare unnecessary calls to 911 that might potentially prevent others from receiving the aid they need.