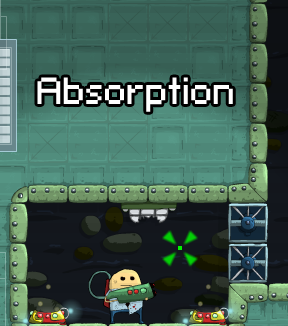 Man, scientists. Haven't you ever heard of placing an ad in a university newspaper advertising your physics research study? Tell people they get to play with a matter-absorbing gun and they'll probably pay you to participate. Why ya gotta be all evil and kidnap a guy to send through a nefarious set of puzzles? The mad scientist villain of Absorption, by Anton Beluzhenko, isn't very smart, apparently. But the backstory isn't why you'll want to play this game. Absorption is a novel and unique platform puzzler that is a lot of fun to play.

You use the [WASD] keys to control the platforming action of your character, while the cursor aims your matter-absorbing gun, which you click to shoot. You'll need to absorb and rearrange various objects to solve puzzles and reach the exit of each level. You can only shoot within the "halo" surrounding your character (the cursor will be bright green if it's within range), and you can only absorb objects that have little white orbs rotating around them. In addition to testing your spatial intelligence when using the absorption gun to rearrange objects, the game also sometimes requires good timing, particularly in terms of dealing with enemies. Just try to get to the exit with as few shots as you can. At the bottom of the screen you'll see what number of shots will give you a 100% efficiency score.

Anton makes a good choice in giving you unlimited shots while also rating your efficiency at the end of a level based on how many shots you used. This means you're free to experiment your first time through a level, and you can always replay it to try to get 100% efficiency if you shoot too much the first time. The portals, boxes, turrets and other elements of the levels give plenty of variety while still being fairly intuitive and thus not overwhelming. And when we're talking about pluses of the game, we shouldn't leave out the fact that the little guy kind of looks like he's from the movie GhostBusters. Who ya gonna call? Absorption!

You can tell if you can absorb an object without trying. Absorbable objects have a white indicator on them.

Is anyone having problems opening this game? It seems to just freeze after I click play.

I would like it better if the game presented you with an evolving set of obstacles, but used them more consistently. Also: Getting kind of tired of the mad-genius experimenting on you trope. Can't we skip all the conversation, Dr. Evil, and just get to the part where you start torturing me?

While bouncing from either end of the red teleport, use your gun to put the box on the green button. DO NOT EXIT THE RED TELEPORT IN THE ROOM YOU STARTED IN. Instead, exit it in the room with the green and blue teleports.

Use the blue teleport and then duck behind the box the other end of the teleport is next to. The turret will see you and begin firing. Its bullets will travel through the blue and red teleports to kill the turret keeping you from reaching the exit.

You should be able to handle it from there. :)

Carny: Like Mystify says, there's a little swirly white thing on objects that can be teleported. In terms of range, you basically have a bubble a certain distance around you, and can pick up/drop stuff anywhere within that bubble, through walls or not. The bubble is indicated visually with a slightly brighter light in a circle around you, but it's usually easier just to see if the cursor's green.

I don't think my solution for 29 was the intended one, since it uses fewer moves than allotted. But it worked:

1. Absorb the farthest right of the absorbable blocks, and put it on the red switch. The other blocks on the red platform fall onto the spikes.

3. Jump on the block immediately after pushing the switch, so you don't get killed by the turret. Quickly jump back over to your blocks on the spikes- you won't be in range long enough to get killed.

4. Absorb an absorbable block and put it between the turret and the portal. Jump up to the portal, and absorb another block before you enter the portal.

5. Put the block you absorbed on the blue switch. Drop down behind the turret and push it onto the bomb.

Now, this is a nice game. Looks good, sounds good, gameplay is smooth and intuitive, level design is clever and it presents some small original elements (even if just tweaks of old acquaintances).

However, I felt like cheating in some levels. Not a huge problem, of course. Unless the level designer intended for some level to be a little more challenging and introduce a new strategy, or something like that, then finding an easier and unpredicted solution could be problematic. Not the case here, as I finished the game with a smile :)

@skylerf, for level 9 you just need to

Shoot the button to absorb it, then shoot on the platform right above the exit to place it there, then jump on it, you'll both fall through to the exit.

gabeknight:
I am also having trouble playing the game. I get the "mofunzone" page but it never fully loaded the first time. The second time it finished loading, but my mouse wouldn't work on the screen. This seems to be a more common problem on jayisgames. many of the games either don;t load or only load a part of the game.

[We are using industry standard methods of embedding games on the page here, and we test the game pages on both Windows 7 and Mac OS X in all of the browsers without fail, so there must be something with your particular configuration that's interrupting the scripts that deliver the games. Always make sure you: 1) have the latest Flash Player installed; 2) the latest browser version; 3) that any adblockers are disabled for Jayisgames; 4) that you have allowed Flash Player to store ample data for both images.jayisgames.com and games.jayisgames.com (where we host games). If all of the above have been considered and verified, then try emptying your browser cache and reload the page. If you continue to have issues, please use our contact email address and report to us: what OS, browser and Flash Player versions you are using that is causing the problem and we will try to reproduce the issue and troubleshoot it with you. Thanks! :) -Jay]

I can't get past level seven...

Nevermind, just saw the white thing around the enemy.

Ha, I managed to break the game. On level 20 where you can drop a spider onto a bomb, if you teleport the bomb away from under the spider just as they're about to hit, then the explosions starts to happen and the game freezes.

But yay, this was fun. Got 100% completion on all levels in the end. I didn't find GregF's short-circuit route for level 29, but I found a fewer-than-target route on one or two other levels.

I figured out a way you can cheat-ily beat a few levels,

try teleporting boxes into the ceiling above enemies,some of the time they will snap to the place the should be, hitting the enemy with enough force to kill it.

Level 17, along with others, I'm sure, can be beaten in a non-standard way using that.