Android developer Yiotro shows us that the best things in life are not only free, they're also buttery-smooth and more than a little offbeat with Achikaps, a minimalist economics simulation with defense elements that fans of rymdkapsel will find eerily familiar. Achikaps has you building production nodes, managing workers and occasionally fending off timed waves of aerial invaders, but has less to do with placing tetrominoes and much more of managing supply and production processes [getting enough raw materials acquired and processed in various player-built facilities to become things you actually need] and defense [amassing enough workers to man the defense stations and successfully fend off the waves of invaders that show up on some levels]. Each of the fifty levels have completion requirements necessary to advance, and the paid version has three times that, along with a level editor and unlimited slots for savegames. Achikaps' slimmed-down look reminds us that content is king, and makes for smooth play even on older Android models — even the nifty two-finger rescaling feature. 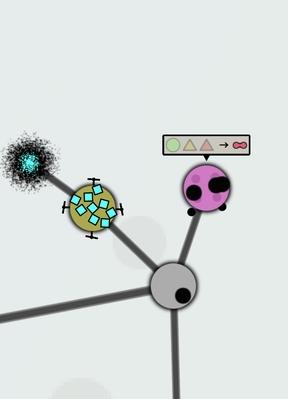 Achikaps levels feature tutorials that gradually get you used to the features and gameplay, but the gist of it is that you can create production structures and then delegate proportions of your workers to either Build, Carry, Defend or Idle using sliders. You're limited to creating structures that directly connect to the grey Platforms; if the layout looks like a set of Tinkertoys - and it does! - then Platforms are your hubs and each only has a limited number of spots available for adjacent rooms. So you'll need to plan ahead, making sure you have enough free space on your platforms to keep building. The facilities you build usually either produce raw materials or convert them into more advanced materials. For example in the picture at right, that black and blue thing is a naturally-occurring resource that's had a Mine (that yellow circle) built to make use of it. The blue squares in the mine are mined resources, which vary from level to level. That grey circle is a Platform, and the pink circle is a Laboratory that produces Chewing Gum. [Mmm-mm! Nothing quite so good as chewing gum that came right out of a lab somewhere!] As it happens chewing gum is a really important thing to have; not only is it used as an advanced production resource, if there's a Palace on the level it will demand chewing gum at timed intervals and if it doesn't receive it on time it eliminates a worker. Processing facilities require raw materials; this lab shows that it uses a farmed resource, a processed Meat resource, and a more processed Food resource, to produce a Chewing Gum. You'll have to make sure workers are available to carry resources to and fro, and to actually staff the building as well. This becomes more interesting as you start having to deallocate all of your workers to contend with the periodic invaders. 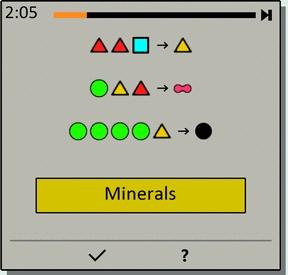 At time of review, Achikaps is getting regular upgrades and improvements. We'd like to see the ability to reposition facilities manually before construction, though the game itself will attempt to reposition them if it can find room for them on a Platform. Making it clearer which facilities are producing - and need - what resources would also help to make it easier to find what that one resource that's missing to complete production, and at present the allocation of workers is a bit finicky; sometimes they'll all linger in facilities that lack the resources needed to actually produce anything, just because that's where the worker happened to be when they were allocated to produce stuff. In all, Achikaps makes for an engrossing little economic simulation that's easy to pull out and play during the spare off moments of your day, with the Autosave feature enabled in the Settings there to make that even more convenient.

I found this game extremely addictive and disruptive to my own productivity, ironically.

Also sandbox mode is great for getting to know how all the elements work and how to deal with basically anything the campaign throws at you.

8,849 Views
3 Comments
chrpa— Jayisgames needs your help to continue providing quality content. Click for details Hi! Weekday Escape and Weekday Puzzle are here! We've got only two escapes this week - by tomoLaSiDo (unexpectedly easy this time) and a retro one by...  ...

3,118 Views
0 Comments
jayisgames.com— Gamified marketing has been gaining a lot of traction in recent years, and rightfully so, thanks to its many benefits, from increased brand exposure and engagement to customer attraction. Incorporating gamified content into your digital marketing plan might be just...  ...

3,988 Views
0 Comments
chrpa— Jayisgames needs your help to continue providing quality content. Click for details Welcome to Mobile Monday! We start with two games by Kensuke Miyahara - the latest and an older one. Both have good playability and interesting puzzles. Kensuke...  ...

3,671 Views
0 Comments
chrpa— Jayisgames needs your help to continue providing quality content. Click for details Welcome to the Roundup 45 with three games! As mentioned in the previous roundups, only odd-numbered episodes are featured since even-numbered are for Robin Vencel's patrons. More...  ...