On the Moondrop website, Amphora is described as "a peculiar puzzle game that mixes story elements and physics." Now, when a developer claims that its own game is peculiar, that's something that makes me both intrigued and skeptical, like a movie poster that's made up its own adjectives to declare itself "Potter-riffic" or whatever. However, having played through Amphora, one has to agree that it is indeed peculiar. It is also magical, enjoyable, and strangely haunting in its own unique way. While its plot is generally shown rather than told, you play as a spirit who apparently resides in the titular Amphora... which, for the record, Webster's tells us is "a tall ancient Greek or Roman jar with two handles and a narrow neck." You act as a kind of guardian to a little girl as she grows, learns, loves, loses, and becomes a woman. 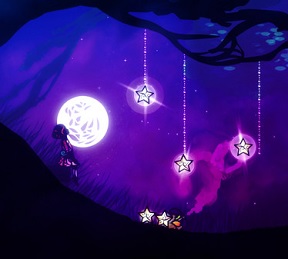 In order to help her through her life, you have two major powers. First, by left-clicking and dragging you can move objects within a certain radius of your pot, rotating them with the [arrow] keys. Secondly, you can connect objects to others by right-clicking and dragging a gossamer strand between them. Holding the right mouse button will allow you to sever these strands, should you wish. Amphora's story is told non-verbally, meaning that a large part of the game will involve experimenting on each screen to figure out what must be accomplished and then how you can make it happen. This can get a little frustrating at times, but Amphora's pure visual appeal keeps things interesting. 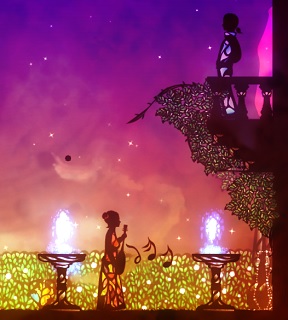 The graphics and atmosphere are far and away the best part of Amphora. Usually, an intro like that ends up being a backhanded complement, but I mean it sincerely. The mix of shadow-puppet silhouettes and stained-glass is gorgeous and a unique visual style. The closest comparison would probably be The Fool And His Money, but even that lacks Amphora's sense of animation, and while games like Limbo have been excellent at using shadow to invoke foreboding and desolation, Amphora is able to extend it to other emotions as well, all without dialogue. The soundtrack combines with the visuals to create a magical atmosphere that's so thick, you can almost smell the incense.

The puzzles in the game are generally sensible, even when they're hard to deduce. Most likely there's an elegant solution for each one of them, but at times I was able to kludge my way through throwing things around and tying everything to everything. Truthfully, the gameplay is at odds with the atmosphere at times, leading to a few moments of tone-breaking unintentional comedy: things like trying to a maneuver a blown kiss across a crowded marketplace, then you accidentally drop instead of drag and suddenly someone's getting smacked in the face with a giant fish. But if the challenge of Amphora sometimes descends into trial-and-error territory, it's a game that wants you to take your time. Overall, Amphora's has a couple of bumps in its flow, but when the scenery is this good, it doesn't matter at all.