Another World, or, as it's known in North America, Out of This World, is a stunning example of storytelling in a video game originally released in 1991 (and re-released with better visuals in 2006) by Eric Chahi. Built as a cinematic platform adventure, you take on the role of Lester Knight Chaykin, a young physicist who is teleported to a barren alien planet while running an experiment using a particle accelerator. You soon make friends with one of the humanoid aliens and together work your way through the subterranean environments trying to escape with your lives! 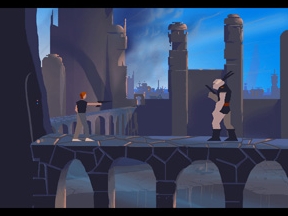 Lester's acrobatics in Another World are more similar to real-world physics than your average action game. Instead of being able to leap twice his own height, Lester's jumping skills are limited to a gazelle-like leap forward. You also have the ability to run, though you'll spend a surprising amount of time walking, and in addition to a few simple kicks, you soon get your hands on a gun that can fire a

The game is divided into over a dozen invisible chapters that are only apparent when you die. And yes, you will die a lot in this game, but it's never frustrating and you rarely have to replay more than a few seconds of your previous actions. Trial and error puzzle solving will get you very far, and most of the time you won't realize exactly what you have to do to proceed until you fail a few times. No worries, though, as it never gets frustrating.

Combat isn't the central focus of Another World, but you'll find yourself in a fair number of gunfights all the same. Most of these will be tests of your ability to alternate between firing regular shots, replenishing your shield, and trying to take down your opponent's barrier. One hit and you're a goner, so work fast and practice your timing at every opportunity. 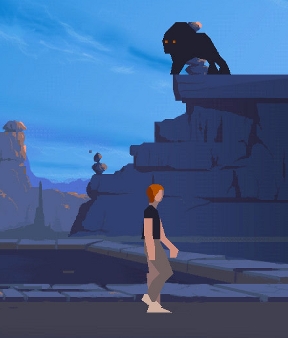 Analysis: Another World is one of those games that will quietly stun you. The music and sound effects are sparse, transporting you to this alien world with little more than a few colors and a few polygons. The characters feel very alive, and you immediately become attached to them and their plight. The innovative use of cutscenes and non-standard portions of gameplay keep you enthralled by the experience from beginning to end.

It would be impossible to discuss Another World without mentioning the impact it had on cinematic gameplay in the early 90s. Although the game enjoyed a released on well over a dozen platforms, it was originally available for the Amiga. Back then, animations this rich were practically unheard of, and cinematics were rarely anything this special. One look at the game's opening cutscene and you'll see what I mean.

In 2006, Chahi re-released Another World for Windows with higher resolution graphics than the original Amiga game. The backgrounds received a remarkable upgrade, though most of the active elements of the game remain unchanged. It's quite a step up from the 16-color 320x200 game, but if you're a purist, this 15th Anniversary Edition offers both modes. The storytelling is very powerful no matter your graphical proclivities, and the subtle emotions conveyed on the characters' faces is phenomenal in any decade.

An early standard in interactive storytelling and artistic creativity, Another World still manages to challenge and intrigue gamers years after its release (and re-release).

'Out of this World', and its un-official sequel, 'Heart of the Alien' was two great examples of amazingly innovative gameplay (at the time) combined with a deep storyline. These games were so immersive and challenging. (You die a lot!)

These games made a huge impact on us at the time when we first played them. Good to see that its still going and is available to play.

Oh god, I remember this game. I honestly couldn't get past the 3rd or 4th screen. I'll give it another go though :)

This is actually the best game ever. I think I invented new profanity while playing this every time I die. Fans of challenging adventure games definitely need to check this one out. Just bring your Big Boy/Girl pants for this one.

I remember being stunned during the flooding water scene. To witness something like that in 1991 was breathtaking. Still is. :-P

Wow, the Action Button Manifesto: Best Game of All Time. I was not expecting to see this again.

Dora, unless I'm missing an appearance by Morgan Freeman, this is only the SECOND best game ever. Actually, I never cared for this one, but judging by the looks I get when I tell people that, I assume I'm in the minority there.

I remember having this game for my super famicom back in the days. Superb graphics and gameplay, with some nice 'odd' touches. I was hoping something like this would happen when they switched on the accelerator at CERN

Uh, despite the review, the frequent deaths *can* get frustrating. Do expect to be trying something different all the time, and there's a few spots where the execution bar gets raised a bit, in longer sequences. However, most any player can get through given perseverence.

I came to make the same comment as notk. "Never frustrating"? Did I play the same game?

It's never enough to make you hate the game, but Frustrating is the monkey soldier's middle name.

I love this game. Entire gameplay experience (and especially the terrific ending) were - are -really great and cinematic. However, I remember that different platforms had different music in the end - the PC one was terrific (and complemented that what happens in the end greatly), but on some other system (Amiga?) it was completely different and entirely unfitting.

Whoever is now seeing this game for the first time two advices - first, take your time and arm yourself with patience, and second - try to think outside the box. This is more of an adventure game than an action game or a platformer, and trial-and-error is a natural part of the game. Stick with it until the end, it *will* be worth it.

I just hope this new version retains the PC endgame music, not the other one.

I played this game when it came out back in the early 1990s on my Amiga 500. For its time the game was simply amazing visually and there was nothing out there at the time who matched the quality. The game was fun (but hard!), and I absolutely loved it. Glad to see it making a comeback!

I'm far too young to remember this game first time...your not buying that are you?

This game was an epiphany for me ..this one got me into being a game head.

I recall the very moment ..someone said 'have a look at this...its cool' and poooff I was was in love.

Haven't checked it out yet but are the sequels available too I never finished them...Fade to Black? or am I dreaming.

You young un's I highly recommend you play this and its well worth stumping up for the full version.....you will love it

Out Of This World was the first game that I finished to completion. I was so proud because none of my friends could do it. I'm not so sure that I could do it again.

This was one of my favorite games on one of the old Sega systems. I was aces at it. The final level was quite hard. I can't imaging trying to play this with a mouse instead of a joystick because of the fast and furious parts.

This game is quite the same as Flashback (also on Amiga). Flashback is less difficult, but has more adventure-style features (e.g. you have to go find an office, tell them to issue a work permit for you and then go work in a travel agency to make money and buy yourself a ticket so as to proceed). Flashback has more "platform" gameplay and also great moves, cinematics and action.

Flashback is the sequel to this game.
Fade To Black is the 3rd in the series.

Fiendishly difficult. I couldn't find the patience needed to get through some of the challenges and gave up. I wish the auto-checkpoints were more frequent :(

Flashback is not the sequel.
It's a similar looking game but that is all it shares with this classic.

Flashback is still a good game though..

Technically not an official sequel, but seeing as Delphine made both of them back-to-back (of that style), it's considered as such.

Hm.. no, Flashback is not a sequel nor intended to look like one. (it's just similar mechanics)

But, although the author never wanted a sequel, (something about keeping the ending scene open) the company did a one for the SegaCD entitled Heart of the Alien, in wich you play as the alien friend of the original game.