As the Village Turns 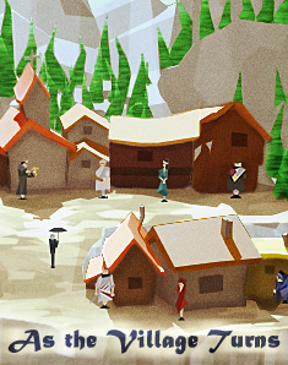 Mihail has been sick for as long as he could imagine. He has a skin condition which forces him to avoid the sun; he suffers during the day but the day is when Mihail can visit friends, family and fellow villagers. While sunlight saps his energy and drains his life, these connections to others heal his spirit. Digital Dreams' experimental As the Village Turns presents a philosophical dilemma: is it better to have strong relationships or longer life?

Part narrative adventure, part interactive art, As the Village Turns is played using the [arrow] keys to move Mihail around the village and pressing the [spacebar] to interact with the other villagers or, if he's in front of his own house, send Mihail to bed. There are over 1,400 lines of text and each day Mihail's energy bar grows shorter while every conversation shrinks it further still. In order to see all conversations to full fruition, when the game is over, you'll want to start again. There are two general endings yet many more possible paths for conversations (and relationships) to go, almost in a Groundhog Day sort of way.

While it's probably not as controversial as Loved, As the Village Turns does broach some touchy topics about religion, life, and the choices we make. Unfortunately, it lacks a strong sense of achievement and one of the endings tends to meander overly much. That's made up for, though, by the unique style, superb artwork and intriguing premise. Plus, there's much to ogle and enjoy in As the Village Turns—layers of nuance, story and graphical artistry work together for cogent effectiveness. It's a different game to all who play it—much like each day of our lives.

Play As the Village Turns

I ate the Priest first. I couldn't stand him scolding me all the time. I don't care if I go to Hell for that.

I cried a bit at my funeral. Then I played again and took the other path. Yum.

I wish that there was a way to make the game screen bigger.I particularly liked the games visual even though it was simple.

also is there anyway to

cure yourself? I find that I have to bite at least one person to save myself to talk to the doctor more and I was doing fairly well until someone bit the doctor at night as well.

When you click comments and questions, it opens another instance of the game instead of the review.

I loved this. I couldn't figure out how to

cure myself, unfortunately. I can talk to the doctor multiple times per day, but always have to bite at least once before I can make any progress.

One thing that I have noticed that may help your decision-making process:

When you choose someone at night, they seem to choose a house close to them the next night.

After I greedily bit everyone I possibly could on my first play through, watching guiltily during the day as the dwindling numbers of villagers fretted at the losses, I felt compelled to try to "win" without biting anyone ever again.

For me, "win" would be to get that fickle fickle Paula to fall in love with Mihail...or at least Simon. So far, no luck, though! Can't see why the guys like her so much...what a flake!

After seven additional playthroughs,and a loosely kept log of conversations, I don't think

Along the Claudius conversation path

I spoke to Claudius twice a day for a full week, feeding only when absolutely necessary to keep myself alive, and still couldn't find a cure. I'm not sure if this is because certain characters seem to die right after their plots sort of wrap up, or because of some predetermined way the other villagers choose...

For the most indepth playthrough, with the most background I started with Farmer Gheorge, intending to work my way through each character.
Farmer Gheorge revealed

Mihail's father killed two men in the village, his own brother, and Lumberjack Constantin. And Nebun's father disappeared that night as well.

I'd start there, and then complete each family member's stories in turn.

Probably my favorite character was the Lumberjack. He had such a poignant outlook.


He has a list of quotes he repeats that I just love... Listed them all the spoiler tag below

To live in hearts we leave behind is not to die.

A wise man knows himself to be a fool.

Better to act twice than lose your way once.

Bravery is being the only person who knows you are afraid.

Sow an act and you reap a habit.

Your father was just an ordinary man, he could not help doing what he did.

The best way to suppose what may come, is to remember what has passed.

To gain that which is worth having, it may be necessary to lose everything else.

Can you believe the same god that made the sun, also made the allergy?

Illness is not something a person has, it is a different way of being. You are no different from the other people in this town, Mihail.

Always put off till tomorrow what you should not do at all.

Greater love hath no man than this, that a man lay down his life for his friends.

I leave before being left. I decide.


I have found three different endings so far.

Your Village lives on forever - I talked mostly to the creepy guy on the bottom left and only ate a few ppl.

This is if you eat enough to keep yourself alive, but in the process eat enough villagers. You know you've gotten the ending when the last person you eat fully satisfies your hunger.

You die, but the village lives.

You die, and the village dies with you.

This happens when you bite a villager, but still allow yourself to starve to death

I'm sorry but... how the heck do you get this guy to sleep in his bed??? It seems the only option I have each day is to talk until all energy is wasted..

Initially, you need to talk to more people... it's not until later you can go to bed:

At night of the third day, you have the choice between biting someone or going to bed.

Thereafter, from the fourth day on, you can send Mihail to bed instead of talking to someone during the day.

I think I know what his "skin condition" is.