Originally released in 1983 by Tim and Chris Stamper's Ultimate Play The Game, Atic Atac was one of the most heralded games for the ZX Spectrum. A top-down action-adventure game, it was the deceptively simple looking tale of an adventurer trapped in a haunted castle who must battle his way from basement to "atic" to find the keys that would let him escape. As the 80s turned to the 90s, Ultimate Play The Game would evolve into a little company called Rare and the Spectrum would cease production, but a group of enthusiasts would keep the art of the Speccy alive even today. A group of them, Retrospec, have developed a remake of the no-longer-available classic. And so, here it is: Atic Atac, offered now to addict and challenge a new generation of gamers. 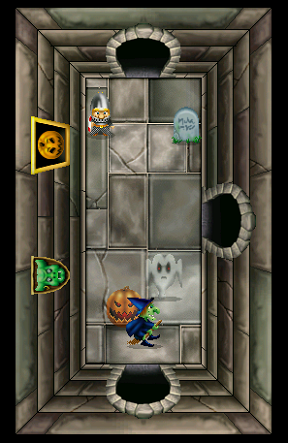 Although you can customize the controls in Atic Atac's menu, the default setup using the [arrow] keys for movement, [shift] to fire, and [ctrl] to pick up items works quite well. You start by choosing one of three classes of hero to play as, each with their own strengths and weaknesses and access to specific kinds of secret tunnels. The Knight can quickly fire spears in the direction he's facing, the Wizard can fire a ball of energy that will bounce around the room, but only one at a time, and the Serf who can fire each of a pair of spears that will return to him after being thrown.

You must explore the castle from atic to basement cavern, staying alive long enough in each room for the doors to open. Staircases will lead you from floor to floor, as will a misplaced step on an open trapdoor. Keys will open gates of the appropriate color, and possessing certain items in your inventory will fend off the deadlier (and likely-to-be-key-guarding) monsters. Though the layout of rooms remains the same, items will appear in different places in each playthrough. Your health, represented by a slowly consumed roast turkey, will reduce over time, but can be replenished with a variety of foodstuffs found around the house. Only the most skilled will be able to assemble the Golden Key of ACG and escape!

First, a caveat: This reviewer wasn't alive in 1983, let alone a Spectrum ZX owner, and even if he were, he'd probably be more obsessed with that walking egg with boxing gloves. Thus, accuracy of adaptation is not something that we'll attempt to assess. But, speaking as a modern type of gaming reviewer guy, Atic Atac is a polished piece of work, and an incredibly addictive experience for any era. The furious combat is reminiscent of early Legend of Zelda dungeons, while its exploration aspects invoke such classics as Gauntlet and Adventure for the Atari 2600. Of course, Atic Atac also replicates that specific brand of retro difficulty, hailing from a time where gamers were expected to happily draw their own maps, and just go along with the idea that dropping a clawed hand to distract a hunchback or whatever was a perfectly reasonable puzzle. It should be no surprise that Atic Atac was an inspiration for the similarly obtusely-difficult UK game show, Knightmare. No matter: whatever old-school quirkiness Atic Atac has is balanced by the clear love that both the original and remake designers had for their creation. Put a Duran Duran cassette in the tape deck, cue up a few Fifth Doctor serials, and prepare for a first rate "atic" crawl.