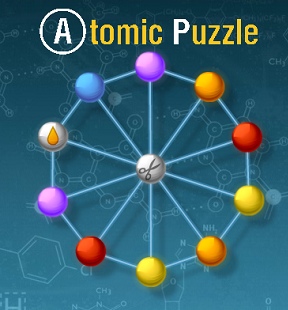 Flash games can be filled with so much action. Running, shooting, maiming, killing, jumping, smashing, destroying... occasionally it's nice to get away from all that activity and play something that simply stimulates your brain cells rather than your adrenal glands. Something calm, soothing, almost Zen-like. Well that something may be Atomic Puzzle, a quiet yet unique and tricky little puzzle game by Sigma Studio.

You begin with a basic shape that looks like a molecular model, colored balls (or atoms) attached by gossamer lines. The object is to remove all the balls from the screen by "crashing" them into each other. You can click on an atom that is attached to two or more of the same color to collide them together, thus removing them all and without the nuclear blast and resultant devastation that would accompany this feat in real life. Continue to combine the colors until there is nothing left on the screen.

It sounds simple in theory, and it begins that way. At first all you have to do is figure out which combinations to remove in what order to empty the screen. Then it gets a little tricky, as extra "trick" atoms start appearing in your neat little molecules. Balls that can paint any ball that it is attached to, balls that move around the colors, balls that rearrange the bonds, and even a little scissor ball that can detach connections. Eventually you will be facing long, complex molecular chains that incorporate several different colors as well as the "trick" balls and that's where it gets very interesting... and perhaps not quite so calming. 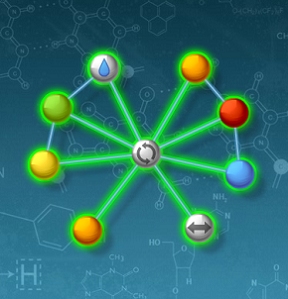 Analysis: Atomic Puzzle is one of those deceptively easy puzzle games that are designed to suck you right in and not let go until you've solved the last one. Fortunately, there are 50 levels to get through, so that might take a while. Gameplay is unique, difficult in parts, and yet curiously soothing.

The game is beautifully presented, with the luminescent molecular models floating on blueprint-like background, a feast for the eyes as you contemplate your next move. Calm, quiet music only adds to the meditative qualities of the gameplay, keeping everything Zen even as you struggle with the tougher upper levels.

If you're looking for an adrenaline rush, you might try somewhere else. If you're looking for a tricky, logical puzzle game to while a few minutes away with, then definitely check out Atomic Puzzle. Between the gorgeous graphics, the easy-going music, and the pure logic of the puzzles themselves, you might find you've put yourself into a trance state. Finish and you will emerge triumphant and curiously calmed, like meditation accomplished with casual gameplay.

This game is very calm and soothing... at least in the early levels.

Anybody else reminded somewhat of Minim?

Clever concept, although having to add a Facebook app to see the walkthrough is a big turn-off to me. Sorry, I don't care about your game THAT much, which means the first time I get stuck (embarassingly enough, Level 14 in my case) I'll go find some other time-waster that doesn't bother invading my privacy as well.

[You don't have to add a Facebook app to see a walkthrough for this game. -Jay]

For those of you having trouble with the levels, King actually offers a video walkthrough on its site available here: http://www.king.com/intermission_viral.jsp?gameId=296&action=solution

It's an okay game - though almost every puzzle can be solved by brute force in a minute or so.

Uh, what would you suggest then jay? The walkthrough button takes you to facebook?!

you can just skip levels. I was stuck on 14 also, an I also prefer not to use facebook to see a walkthrough. Apparently thats not the only option, but those in the know are remaining mum on the other, secret walkthrough.

I've noticed an increasing number of games lately that seem to be hooked into facebook in one way or another. I dislike these social networking sites and refuse to get accounts on them. If a game is associated with facebook it would be nice to see that in the description.

Great game! Thanks Dora for the link to the video walkthrough.. I got stuck on level 40.

I just think that it should be clear in the game that clicking on the walkthrough takes you to facebook since all applications you visit are now added automatically if you're logged in and haven't changed your settings. Granted this is a problem with facebook and not really the game.

I'm up to level 26, and don't actually care enough to look at the walkthrough... I think I'll stop here for now.

there is another game under the same name (Atomic Puzzle), imo much better than this: https://itunes.apple.com/us/app/atomic-puzzle-*/id645886045?mt=8

Getting Over Addiction to Runescape

966 Views
0 Comments
jayisgames.com— Since Runescape's release back in 2001 it has grown into an MMORPG titan amassing over 1.1 million subscribers from 2019 to 2020. The interesting part about the game's success is that most of the players in the community understand its...  ...

1,262 Views
0 Comments
jayisgames.com— Here's some trivia for you: solitaire isn't a game. Instead, it's a whole genre of games, encompassing more than 500 different variations on the same basic card-sorting theme....  ...