Steven Universe is one of those cartoons people keep recommending to me, and it turns out, it's for a good reason. The series, which follows the superpowered guardians of Earth, the Crystal Gems known as Garnet, Amethyst, and Pearl, as well as their half-human charge/bestie/party-starter Steven, is not only ruthlessly adorable and nostalgic, it's also brilliantly plotted with fantastic character development and a lot of heart and much needed diversity and representation. So, naturally, the release of Grumpy Face Studios' Attack the Light as a turn-based strategy RPG for iOS and Android with a Mario RPG-sy flair, has a lot of fans very happy. At the start of the game, Steven accidentally unleashes a swarm of powerful enemies from an ancient Gem weapon, and tags along to provide support and Hambuger Backpack-ery for the others while they travel the world trying to return the corrupting light to the prism Steven accidentally released it from. Though it focuses mainly on dungeon-crawling combat with an eye on strategy, Attack the Light does so with all the style, charm, and heart that fans of the series have come to love. 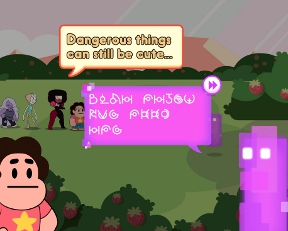 Even if you've never played an RPG before, Attack the Light is easy to pick up. Just swipe on the screen to move your party towards the next room, and tap on things to interact. The majority of the game is made up of combat as Steven and the Gems work their way through dungeons filled with monsters created by the Prism, with Steven acting as support and item handler, and the rest of the gang dealing damage. Each round grants you a number of stars, shared among everyone, you use to execute attacks or abilities, with different skills costing a different amount of them. When you run out, you end your turn, though you can do so early to have the amount of stars left roll over to the next round, or use an item. In addition to the restorative and buffing items you can carry in Steven's Hamburger Backpack (Together Breakfast anyone?), Gems can find and equip Badges that give them passive bonuses, like a chance to resurrect each turn if they've been knocked out, or a damage bonus against a specific enemy type. 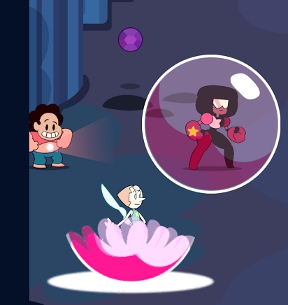 Instead of hit-points, the Gems have Harmony, which functions the same way... when they take damage, their Harmony depletes, and if it runs out, they're out of commission until the battle ends, or unless you have an item to revive them. If you tap the screen when a star appears either right before you attack or immediately before something attacks you, you'll deal greater damage, and take reduced damage, respectively. While Garnet, Amethyst, and Pearl all fight equally well, their statistics and abilities are diverse in a way that compliment one another, and whenever they level up, you'll either gain a new ability, or choose a stat to increase. Steven doesn't have a Harmony meter, but he still uses star points to trigger support abilities such as his shield or healing the Gems. Most of the items you'll find heal or boost stats, but each Gem can be equipped with a badge that grants a passive effect, like increased damage against a certain colour of monster. Busting up enemies grants you crystals you can spend on items at "shops", and experience points, though you can also gain experience for specific Gems by picking the "right" dialogue choice when it's presented.


The biggest flaw might actually be that it's a little too simple and repetitive... dungeons are largely empty corridors with locked doors and chests, and most of the battles are straightforward enough that they start to feel mechanical. It's not that they're not challenging at times... the special stages like the gauntlet are a lot of fun for the structured difficulty they present, and the boss battles are all unique and varied. Still, it would have been nice to see more puzzles to make areas feel fleshed out beyond the different environment art, and to break up the punch ups. On the other hand, if you're a fan of the show, while Attack the Light is, well, light on any substantial character or plot building compared to fan-favourite episodes, it's still very well done. "Haha, you liiiiike me," Amethyst goads when you heal her, while a smiling Garnet informs Steven that he's cool, too, when he gushes over her. You can nitpick if you're really determined to... where did all those Cookie Cats come from if they were discontinued? How does giving one to Pearl heal her when she hates eating?!.. but, really, the whole thing is light, cheerful, and funny, and the great character dynamics even come across during battle... Steven gasps and grins in delight when the Gems do well, and his healing takes the form of encouragement as he enthuses over how awesome he thinks they are. All of it is presented in a simplified design of the original cartoon that looks gorgeous on the iPad and practically oozes charm and polish... it feels, basically, like a Saturday morning cartoon in a game, and that's a hard thing to really nail down. If you love the show, Attack the Light is a gorgeous, goofy companion to it wrapped around simple yet engaging RPG combat, and even if you've never heard of Steven Universe, there's no time like the present to grab a Cookie Cat and load up and let it drive its van into your heart.

Android:
Get Attack the Light