Card games: love 'em or be just sorta "meh" about them. We happen to love them, and when it comes to downloadable solitaire games, you'll always be hard-pressed to outdo the card masters at Anawiki. New from the developer that brought you Soccer Cup Solitaire comes the smooth, attractive, and long-playing tri peaks sort of game Avalon Legends Solitaire. One you start, you probably won't want to stop. And hey, we won't blame you! 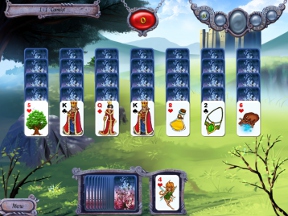 Simplicity is always the name of the game when it comes to cards, and the fewer lame gimmicks the better. Avalon Legends Solitaire features the minimum amount of story required to actually say it has a story. All you need to know is that there is a legendary deck of cards that has mystical healing powers. They were scattered years ago, and now you're on a quest to find them all. How do you find missing cards? By playing cards, of course.

Occupying most of the top of the screen is an arrangement of cards with the bottom-most cards turned face up. Below that you'll see a tableau consisting of your deck as well as the current "in-play" card, also turned face up. The goal is to move cards from the top of the screen to the in-play card on the bottom. you can only move cards that aren't covered by other cards (similar to mahjong solitaire), and it must be either one rank higher or one rank lower, regardless of suit. The more cards you move, the more face-down cards are flipped over. Repeat until the screen is cleared!

To spice things up and give you a reason to play a computer game rather than sit down with a real deck of cards, Avalon Legends Solitaire features a few special cards as well as bonuses awarded for being an awesome card player. For starters, each level has a goal that must be met in order to proceed. So, for example, you might have to earn a certain number of points or play a perfect game. And of course, there are locked cards later in the game, poor little critters that are blocked by, say, stone, and can only be freed once you find a hammer card. Much easier to do in a video game than in real life! 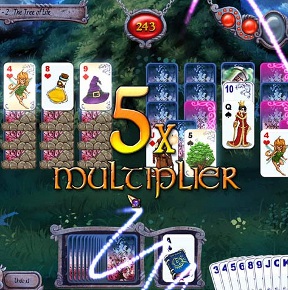 Avalon Legends Solitaire also has a power-ups store you can visit between hands. Spend points you earn to buy items that grant you special abilities, such as a pendant that allows you to see how many cards are left, or power-ups that turn over a number of cards. You'll need to hoard points to spend them at the store, however, as nothing comes cheap in this game. Keep combos going strong to rack up a good score, and don't forget to unleash spare cards to maximize your combo efficiency!

Analysis: Card games are one of the darling genres of the casual gaming scene, especially when it comes to solitaire. Fairway Solitaire was one of the first heavy-hitters to find its way to our screens, and its combination of rich visuals and pixel-perfect gameplay made it a clear winner on every front. That tradition only grew stronger with each successive game. Even though the gameplay always stays about the same, the experience somehow gets a little more immersive and a little more entertaining.

Avalon Legends Solitaire follows suit (sorry, had to include that pun somewhere) with a gorgeous set of graphics that are bright and engaging from level to level. Cards have wonderful illustrations on them and are a treat to look at, and you'll even love hearing the sound effects such as the little "snick" when you move a card!

There's very little not to like about Avalon Legends Solitaire. If you're looking for fancy gimmicks like mini-games, crazy power-ups, or some sort of storyline that interrupts the game every few minutes to tell you what someone is thinking, you won't find them here. Instead, it's just cards, a power-up shop, some nifty in-game items, and a lot of solitaire. Which, you know, is exactly what you'd want from a game with the word "solitaire" in the title!

But how's the music?

I have earned the hammer but do not know where to find it to activate and use it. Please advise. Many thanks!

My only complaint about the game is the seeming lack of music (so far) and the fact that the graphics are set up so that the number on the card is blocky and isn't always the clearest... though that might be because I'm not playing in full screen. :L

Excellent game but pretty tough now I am well into it. I am at a level where I have to earn 7000 points AND a combo of 18.. I can get the 18 combo quite easily but I have played for about 6 evenings and only won the 7000 points once. When I start a new set I still have all the wild cards but the part I have won (either the 7000 or the combo) has been lost and I have to start all over again. I am aiming at the 7000 points first without using the wild cards because I need them to make the combo. Do other players find it as difficult as I do?
I have bought many aids in the shop but they only help a bit. Grrr
Anya

I did great at this game until I bought it. At one point I made a combo of 40 cards, 30 cards, 20+ cards. Now that I paid I'm at a level where I only need an 18 card combo which should be easy to attain but I can't get it based on the cards - not how I play them. Some deals less than 10 cards are played. I've played this series at least 10 times which is a hundred games and have never come close to an 18 card combo. I think it's rigged. I won't buy another game from this company and am deleting this one. It's not fun anymore. It makes no sense that I could make large combos until I bought the game - then you can't advance because the cards simply aren't there to play. Disappointing. I like a challenge but not a rigged game that takes advantage of a purchase.