Ish Games is back with a brand new awesome quest! An Awesome Seaquest to be exact. Coming in hot on the heels of their previous entry, Awesome Seaquest is a maritime strategy game with a little incremental sprinkled on top. It's your job to lead your armada of blue ships, subs, and choppers against the hated reds in a series of fast-paced skirmishes on the high seas, and then return to base to shore up funds, make repairs, and research upgrades. The combat is fun to watch but it's largely hands-off. Your units do most of the fighting on their own, leaving you free to retreat units that are too badly damaged or to deploy special weapons, such as air strikes or EMPs, with the [mouse]. Your base is where the real challenge happens. You've got oil rig workers and researchers that provide valuable resources, and it's up to you to carefully weigh cost and benefit as you upgrade them, heal them, or overwork them to squeeze a few extra bucks out of the poor guys so you can more efficiently do battle. All of your units are upgradeable but when they die they're gone for good, so be sure to keep an eye on the retreat button if things start to go south. 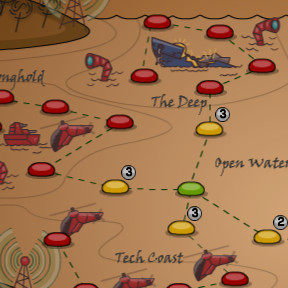 Awesome Seaquest is a fun and fast-paced strategy title, but it might require a few restarts to get the hang of things. If you run out of both money and units you're pretty much done, since you HAVE to do a battle at the end of every single day, and if you can only raise enough cash for one measly scout ship then that ship is going to die and you're going to lose. This game requires you to get your act together pretty quick, and once you get the hang of it, it becomes massively rewarding. You get a bonus reward of $500 if you beat a battle on the first try, so early success means early upgrades and buffed out units that will help you later on. And growing your little capitalist empire is just as fun here as it's ever been. There's something delightfully wrong about overworking your little rig-workers to build your pile of gold. Navies don't pay for themselves, people! So give Awesome Seaquest a whirl, and be quick about it. Time is money!