Awesome Zombie Exterminators! Zombie Exterminators are awesome! Or at least they are in this action-driving game by EmitterCritter. In these trying times where the dead walk the earth, Jake and his friends see an opportunity to make a little cash by beefing up their car, taking to the road, and collecting the bounties to be had on any zombie who doesn't wait for the light at the crosswalk. Move the mouse to steer the car as you drive through the city, automatically firing at the monster and obstacles in your path, earning cash for each one cleared. They'll fall just as easily to a head-on collision, but that will take a chunk out of your car's health. You'll also need to keep an eye on the gas gauge too. There are power-ups to collect, though, which can give your more cash or make your ride a little smoother. Use the cash in-between levels to purchase upgrades for you car, or fellow Exterminators who will ride shotgun with a literal shotgun. Kill 100% of the zombies, and retire a successful post-apocalyptic businessman! 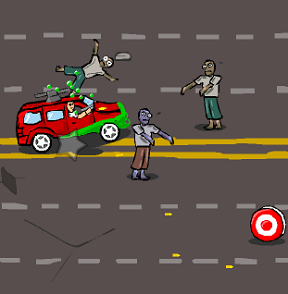 With its bouncy animations and cartoonish violence, Awesome Zombie Exterminators is much more comedic than it is scary (though that may just be because some of the zombies look like undead versions of Moby the Brainpop Robot). It does, however, have some nice features that will keep you playing, like how your vehicle will lock into highway lanes for easier aiming, or the slow transition of your car from squeaky-clean to covered-in-ichor as you plow through enemy legions. There isn't much replay beyond trying to complete your task in as few days as possible or futzing about in Survival Mode, but let's face it: there's something viscerally appealing about the meeting of bad-guy with fender, and Awesome Zombie Exterminators is more than happy to oblige.

"Start Muted" is a wonderful option... when the game isn't preceded by a loud ad that doesn't seem to have built-in volume controls. Though I suppose that's less irritating than those obtrusive rollover ads that like to decide they've been rolled over mid-game and expand over the game.