Dreams can be pretty weird, especially if they are of a handsome guy telling you that a magic book told him you were the one chosen to save a magic land from his evil uncle... Wait just a minute! Handsome guy? Magic Book? Fabled Land? Evil Uncle? Yep, that can only mean one thing, that the latest Azada adventure has finally arrived! Created by ERS games, Azada: Elementa is the newest entry in the chronicles of Azada. 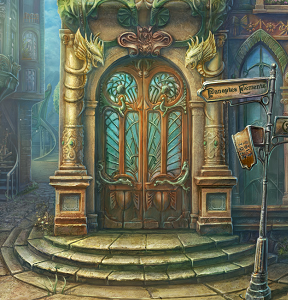 So the evil Uncle, Panoptes, has taken over the land of Azada, defeating the elemental mages who keep nature balanced. Wait, seriously, again? You know, maybe Azada should look into getting some better guardians than Titus or those mages who keep letting the evil Uncle take over, necessitating yet another rescue from yet another chosen one. Just saying. At any rate, Panoptes is exploiting the resources of Azada both there and in the real world and it is up to you to journey to the magical lands of Azada and rescue the elemental mages and set things right. Because, you know, nephew Titus has proven time and time again that he is useless when it comes to stuff like this.

Each game in the Azada series is different than the one before, and Azada: Elementa is no exception. While Azada was a series of puzzles strung together with a bare-bones story, Azada: Ancient Magic was a series of mini adventures, and Azada: En Libro was a fully realized point-and-click adventure, Azada: Elementa goes the hybrid route, combining the adventuring and puzzle solving with classic hidden object scenes. Navigate your way between the worlds with the help of your handy notebook, a hint feature, a lovely navigable map, and the changing cursor to guide you along the way. Items that are found laying around (or won from hidden object scenes) fall into a bottom-loading inventory that can drop down to stay out of the way when not needed. 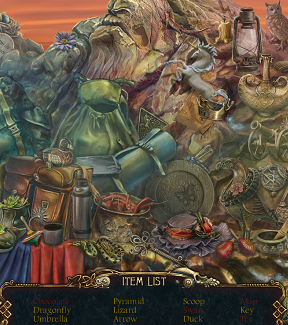 Hints as to what to do come in a variety of styles, from glints of light to a refilling hint timer to Titus sticking his nose in from time to time. Scattered throughout the scenery are also bits of paper which tell a story to explain why Panoptes, while doing everything he can to hinder your quest, occasionally pops up to lend a hand. Panoptes' dual personality is yet another riddle to solve while attempting to rescue the enchanted land of Azada (again).

Analysis: Azada: Elementa is probably going to be the most controversial of the series for two reasons: First, BigFishGames (the original creator) has farmed out the design to ERS, and they have taken a pure puzzle game and turned it into an adventure/hidden object hybrid. This is not necessarily a bad thing, but fans of the original games may be disappointed with the change. 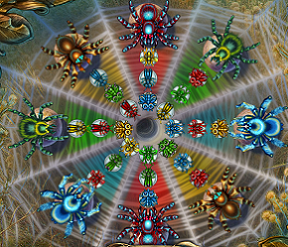 ERS makes pretty good games, and the quality is on display everywhere in Azada: Elementa. Luscious graphics, soothing music, nice incidental sounds. The hidden object scenes are interactive and pretty fun. Where the game really shines are the puzzles and mini-games, which once again straddle a vast array of gameplay up to and including a marble-popping match-3 and a fun rip-off of minesweeper. For those fans of the earlier games there is still a lot of puzzle fun to be had. There are three modes of play to match a wide variety of adventuring skills, and a host of amusing little extras like your companion animal whom you can name and customize with not only body parts but purchaseable clothing.

There are a few flaws, however, which can detract from your enjoyment of the game. There are some translation problems here and there with the dialogue and a couple of the list items in the hidden object scenes. The map will constantly ask you if you really want to move to a new location, which gets old pretty quick (yes, I really want to go there!). The clickable area at the bottom of the screen to move backward is perilously close to the inventory and you can often find yourself hitting one when you meant to hit the other. And the little companion animal, while cute, doesn't seem to do much other than look cute.

Despite the minor flaws Azada: Elementa is still an entertaining addition to both the Azada series and the adventure hybrid ouevre. Pretty to look at and with a great depth of gameplay (especially in the puzzles), you are looking at hours of entertainment for the whole family. Enjoy journeying to the land of Azada once again, but really, find that annoying evil Uncle and do something permanent with him. Please.

Path to the Mage's House

Path to the Mage's House