The match-3 genre is one of the most oversaturated in casual gaming, so how does a new game stand out from the pack? It should have art that's easy on the eyes, cut scenes that aren't ridiculous, levels that mix things up so you never get bored, cinematic music, customizability, and replay value. A collaboration between 10tons and MythPeople does it all in Azkend 2: The World Beneath. You play a remarkably cool-headed woman whose schooner gets dragged down a maelstrom, and the match-3 sections represent her attempts to fix various pieces of gear to help her get back to civilization. 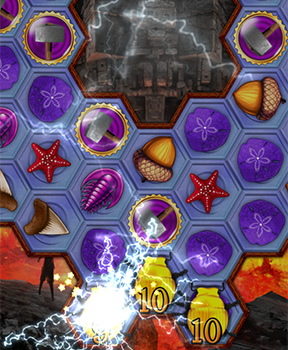 An improvement over the original Azkend released in 2008, The World Beneath is exactly the same in both its iOS and download versions, with the exception that the iOS version contains the option for left-handed controls in the options. The general match-3 motif of drawing a line connecting three or more like tiles to clear them from the board is the common thread, but depending on the level, you may need to use matches to kill bugs, clear fog, stop fires, or change colors. Puzzle levels occur every so often, wherein you must carefully match all the tiles on the board to each other with no refills. As you progress through adventure mode, you'll collect active and passive power-ups that you can equip in your inventory to help you. You can only have one of each equipped at a time, so if you're having difficulty with a challenge, tweaking your power-ups can make the difference.

In between chapters, you'll be treated to a nicely voice-acted cutscene featuring hand drawn art, with which you will get better acquainted through a detail-matching mini-game. A small aspect of the scene will appear in the upper right corner, and you need to find it in the art. 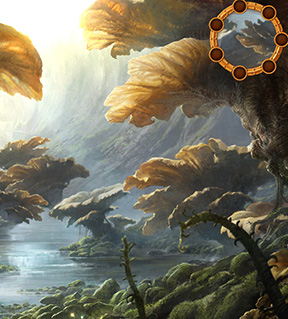 Analysis: There's a fine line between addictive simplicity and dull repetition in a match-3 game. By tweaking the requirements every level in adventure mode, the game never gets into a rut. In later levels especially, the game gets quite challenging, with an unforgiving timer. As you get in the danger zone, the music even changes to "the killer's calls are coming from inside the house" mode, as if your adrenaline weren't high enough already.

The two special modes add additional game time and replay value. Medals mode is simply an opportunity to replay the 60+ levels of story mode to earn medals, and you can play the levels in any order once unlocked in story mode. If you are in the mood for a little no holds barred, no gimmicks match-3 challenge, timed mode fulfills that: two minutes with no power-ups, get your score as high as you possibly can. It adds up to a lot of bang for your buck.

NOTE: This game was played and reviewed on a new iPad and a MacBook. Game was available in the North American market at the time of publication, but may not be available in other territories. Please see individual app market pages for purchasing info.

It takes a lot for a match 3 game to impress me--and this game had me saying "WOW" out loud so often, my dog left the room!!

Not only is this gorgeous, it's challenging enough to have made me replay several boards...and I haven't gone past the demo yet. The story is also compelling, just made more so by the fairy-tale artwork.

And the "hidden object" part of the game gets harder than heck.
http://www.flickr.com/photos/dsrtrosy/6980007472/in/photostream/lightbox/

I'm excited for the chance to win a copy!

Oh...and if I win, I would like the Mac version. (btw, thank you so much for adding a Mac giveaway this week, Jay!)

I think my favorite thing, based on the demo, is how menacing the electricity sounds, and the way the whole board sometimes dims for a second when it goes off. It genuinely feels like using the Tesla coils and the lightning is messing with forces that are a little bit out of your control. That's a really interesting vibe for a match-3.

Loved Azkend 2! The things I liked about it you mentioned in your article - the match 3 gameplay changes frequently to keep you interested, great graphics and the best part - when my time ran out, the game board crashed and burned into the bottom of the screen to the "killer is in the house" music... a fun game I'd like to get for Mac OS X

Thanks everyone for participating in our giveaway! Everyone who commented here should have received a promo code good for a free copy of Azkend 2 by now.

Woot! Thanks again for the giveaway, Jay. Haven't seen mine yet, but I'll keep watch for it. Good thing it hasn't come through yet...it's almost midnight here and I'm sure I'd be playing if it had!!

[I had already sent it to the email address that's in your Casual Gameplay account. Check your spam folder if you don't see it. I just forwarded it to you again. -Jay]