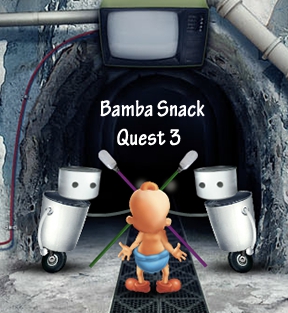 It's been over three years since an adorable baby with an insatiable desire for delicious crunchy peanut butter treats charmed us all in Bamba Snack Quests 1 and 2. Gal Mamalya, the brilliant mind behind the similarly gorgeous point-and-click game Mitoza, has teamed up with the company once again to release a third advergame. And is this game as good as its predecessors? Well, haven't you always wanted to say "Not now, I'm trying to rescue a squirrel from a UFO"? Bamba Snack Quest 3 can make that dream come true, and that secret wish you have about stealing the cane from a geriatric robot too. Don't worry, we'll keep that one strictly between us.

After enjoying the surreal combination of photorealism and cartoonishness in the cutscenes, mouse around the scene. Your cursor changes over hotspots. Click around to manipulate the environment. You're controlling a baby, albeit an ingenious one, so frequently you're limited in your reach, so a big part of progressing will involve getting objects closer to you. 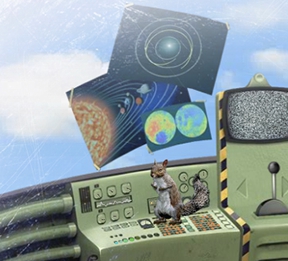 Analysis: Don't be fooled by the literally baby-faced protagonist: while thematically this one is kid-friendly, it's definitely not kid-oriented, at least not for the younger ages. The game relies a lot on your observational skills, since some of the clues are pretty subtle, and putting the clues together often takes some lateral thinking. Many of the puzzles are the rotation variety, which veteran point-and-clickers either love or loathe. This could be a fun game for parents and kids to play together, however.

For those of you who point and click so much that your index finger has calluses, you'll love the game's challenge. It can be frustrating to watch the tot just shrug his shoulders as you try to figure out what to do, but the satisfaction when the light bulb goes off more than makes up for it. And it isn't just point-and-click groupies who will dig this game. Bamba Snack Quest 3 features dreamy, zany art and top-notch animation, right up there with such hits as Samorost and The Blue Beanie. The only thing that could make it better is to play it while munching on a new package of the delicious treat of your choice.

Is there a glitch? My Bamba keeps disappearing between the windows on the second train car (the one with the bubble gum machine). Anyone else having this problem?

i am having the same problem with the train, i have tried twice and both times he has disappeared.

No glitch with the train,

but the guards won't let me stick the stuff on the gate like it says in the walkthrough. Whichever one isn't distracted by the TV yells at me and keeps me from touching it.

You have to put things on the gate while it's open, meaning while it's on the left screen.

move the barrier to the left side, and you'll be out of sight

Finally got past the disappearing act (glitch ?). Don't know what that was. Anyway, I love these games. Hope they're continued.

I got stuck betweren the windows on the train too. Nothing I clicked on, worked after that. Takes too long to load and just get stuck again. I'm done.

I did have a bit of a glitch on the train with the baby disappearing. It was during the part where

I've lured the dog with the wrench, and I've just tried to grab the knitting.

With the kid gone, I couldn't click anything and had to re-start that section. I only had that problem once, though.

[Try combing through our point-and-click tag listing, and skip the ones tagged as 'escape' (note that some tagged as escape are only loosely considered escape games). You can even sort that listing by rating to view all the highest rated games first. -Jay]

Hi,
I need some help on level 5...2 robot and a tv with a remote control. What to do know? thank's

ON the outside of the spaceship i can't click the vent?

Fun game, but every time after I get the round thng from the crate in the spaceship, it disappears and I can't continue. I've tried three times hoping that it was just a glitch. Any ideas? Thanks