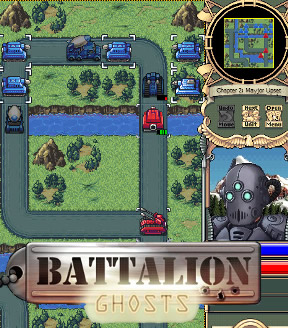 You know what your day needs? Tanks. Specifically, tanks shooting at other tanks. Whoooole lotta tanks. You may not know it, but right now, along with some tactical turn-based warfare, tanks are exactly what you need. And what better way to fill that void than with the next chapter in Urbansquall's Battalion series, Battalion: Ghosts.

Continuing on where Battalion: Nemesis left off, Ghosts throws you right back into the middle of the action, commanding your troops to lead them to victory over the course of the game's story, told in scenes before and after battles. While the humour is rather predictably corny, the writing is at least competent, and serves as a nice way to tie the game together rather than turning it into a string of unrelated battles. It actually manages to nicely capture the goony, cheesy feel of old console or handheld titles.

Gameplay has stayed the same turn-based tactical combat you're probably familiar with by now if you're a fan of the series. (If not, we recommend paying a visit to the tutorial.) Click on a unit when it's your turn, then click on an available square to move there, or nearby enemy to attack. If you're not so much into the, you know, being good at strategy, like yours truly, you can also adjust the difficulty between stages. It alters the AI of your opponents from "lemmings", to "competent", to the always popular, "my face, my face, oh God I think they broke my face". There's still no multiplayer, but, well, isn't that what Battalion: Arena is for? Still, it would have been nice to allow the opposing faction to be controlled by either a CPU or a fellow player. Sure it means your friend would have to wind up taking the fall for you to, you know, progress and finish the game, but I always say a true friend is someone willing to take a humiliating, crushing dirtnap for you. 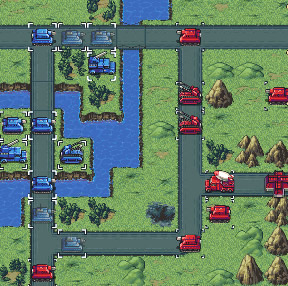 Analysis: In terms of core gameplay, nothing has really changed since Nemesis, but the whole game has gotten a facelift. Visually, Ghosts is a step above the first chapter of the planned trilogy. The art has swung around to be comprised almost entirely out of pixels, and the whole game looks better for it. Animation is also smoother. Hey there! Who's a good looking little turn-based game no longer suffering from sketchy graphics compression? Is it you? Izzit you? Yes it is! Yes it is!

The bad news is that most people will probably fly through the whole chapter fairly quickly.While some scenarios are trickier than others, the first few stages are disappointingly easy. Sure it's friendlier to newcomers, but for anyone who has played the first chapter in the series, the hand-holding just serves to get us impatient for more challenging battles. And after the wide array of weapons and strategies at your disposal in Battalion: Arena, Ghosts' structured battles with new technology doled out at the speed of plot may chafe a little. Players who want careful battles where they have to consider their every move may find the initially limited arsenal a welcome challenge, but the rest of us just want to play with the biggest tanks around. (Although maybe it's best we don't given how small the maps here tends to be.)

But even with the shortish campaign, fans of the genre will probably welcome Ghosts with open arms. It's undeniably well made, fun and accessible, and a great homage to turn-based strategy games of yore. Will we have to wait another year for the last chapter in the series to come out? Hopefully not. But for now, it's time to slap on your elaborately festooned helmet of choice, leap astride your brightly coloured war machine, and ride gloriously into battle. Onward, fearless leader!

This game is really fun, but I am stuck on chapter 4. Those stationary towers are a pain!

For Chapter 4 I just held back making new troops and killing anyone that came at me. Once it was cleared, two stealth tanks could finish a tower off in one go.

I really like this game, even better than the first one, but I keep getting a bug where the screen will get stuck on one side and won't scroll to the other side no matter what I do. Bummer because otherwise I have been having a lot of fun.

If you can't scroll with mouse, then scroll with your arrow keys. It's not a very good solution, but it'll be an ok alterntive for now. For me, it saves more time than using the mouse.

At least I hope arrow keys will work on your bug...

yay! Been waiting for this!

How am I supposed to finish chapter 8? It says something of capturing the oil wells, but I can't get infantery on the mainland, since leviathan is not available. Or is there another way to capture buldings?

Progress doesn't save? Man, I got to level 8, closed the window, and now I have to start over again.

Narretz, simply sail your warmachine to the south western island and make men, or now i think about it, make sure your men are standing on shore, i didnt have a problem when they were on the right tile

alternatively make sure there are no submarines around undetected and unkilled

Ground Chuck - progress saved for me, moved house, turned comp on loaded game and am still on lvl 10

Quite a fun little game.
The progress is saved for me too.

Level 10 was rough on hard, although luckily the AI was quite stupid, wasting all the money on bombers that would just get shot by my interceptors.

A good trick I found for the final map is:

Clean all enemy forces in the sea and then build a battle-cruiser to destroy all the turrets and war machines.