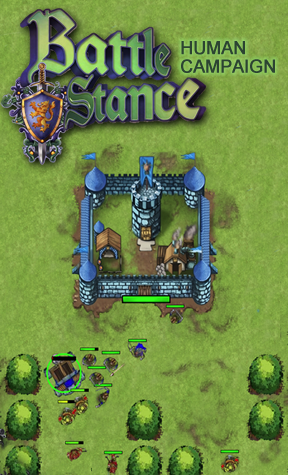 Let me start right off by being honest: I don't usually play battle-themed or defense games. Nevertheless, I'm often willing to venture into the unknown and take on a new challenge. Besides, when the Call to Adventure is sounded, who can refuse? This is why Game Launch Project's Battle Stance: Human Campaign won me over. Brimming with attention to detail, artistic touches and many customizable options, this real time strategy fantasy game is designed to entice every ilk of casual gamer into medieval hero.

Proving once again you can never trust an orc, Battle Stance puts you in charge of dealing with a very nasty invasion that has resulted in enemy strongholds springing up all over your land. In each level, you'll have to balance defending your own home base with amassing enough army power to march across the map and rout the enemy fortress... easier said than done since you'll find yourself under almost constant attack. Enemies will swarm towards you, and you'll have to direct your troops to intercept them and keep your own castle safe, holding the line until you have enough manpower to push through and launch your own assaults. (A handy in-game tutorial goes over the finer points of troop management.) Training soldiers takes time and money, but when you get enough of the latter, you can spend it on a skill tree in game to provide big bonuses to your troops. If you're particularly powerful, you can even complete "quests" (essentially level restrictions and demands) that will give you a permanent bonus for the rest of the game.

Players can use the [WASD] keys to navigate while utilizing either keyboard shortcuts or clicking buttons to perform actions. If you prefer, select "mouse scroll" and the game becomes playable entirely via point-and-click. This customization makes the game accessible equally to seasoned real time strategy gamers and to the more casual, needing-a-quick-diversion-from-work type.

Analysis: Battle Stance: Human Campaign's features allow us learn-as-you-go-along types a lot of leeway. Personally, I'd be lost without that ability to go back and re-attempt failed quests. Perhaps there are seasoned pros who can master each chapter's quest without a second try, but I found some quests to be too impossible to complete given the initial resources. Fortunately, you are able to return after gaining some new fighting classes, towers and catapults to try again. The retread will be worth it; questing success means accumulating even more advantageous upgrades.

The gameplay itself can be a bit dry, but there are controls to increase speed up to five times the normal (which is going to be too slow for most) or to call on the next wave. Frankly, there were times I wished I could increase the speed to ten times the normal: aside from a variety of new resources and a different game map to explore, each chapter is much like the next. Battle Stance: Human Campaign furnishes players with more choices; "casual," "normal" and "hard." I stayed on "casual" the entire time and, as long as I patiently built up resources before venturing past base camp, being in no hurry and having no concern for meeting quest goals, I was ultimately able to reach victory and make my way through. Some would say that's neither the adventuresome nor proper way to play a defense game; for those sort, no doubt solid strategy, planning, and some quick maneuvering on the game field are essentials to tower survival.

As soon as Battle Stance: Human Campaign opens, operatic music rises up to pull you into the moment. Also helpful are sound effects that signal the next wave of enemies, the throes of battle and other key actions. While you can opt to turn the sound off, you'll probably want to use it as an alert to aid your battle tactics. Despite its drawbacks, with so many remarkable features such as the ability to upgrade, artistic graphics, climatic music and a multitude of customizations, Battle Stance: Human Campaign is worth a venture.

Are the upgrades from the tech tree supposed to not work in the next battle?
I always have to upgrade everything again from the beginning and that is not fun...

@Shelly-
Yes...Think of the tech tree as how you build your troops; when and how to upgrade is an aspect of the strategy.

Beautifully made, nice controls, too difficult! I can't get past level 6 on casual.

Yeah...The fact that your troops would stay singularly focused on a goal and ignore the enemies that were attacking them to get the enemy just barely out of reach that you accidentally clicked on because they overlap so much makes this game unbearable. This kind of weak AI is just leading lambs to slaughter.

Maybe the devs were a little too ambitious with all the opera and snazzy opening sequence effects. The actual gameplay here is a serious letdown after all that buildup.

It just feels... really, really, clunky trying to control this game. I can beat the levels on casual, but, it's more frustrating than it is fun to watch your people get slaughtered due to a combination of poor AI and cumbersome interface. It makes the player feel, well, kind of dumb.

If this game had a pause feature (one where you could still issue orders), it would be a heck of a lot more playable. As it is I can't really see playing more than one or two levels without the frustration factor getting out of control.

I've made it through level 10 only playing 'normal' I was worried that I might miss some of the strategy going with the easiest level, but I'm thinking of caving. I've done about half the quests, but I'm having a lot of trouble with the harder ones, and also having trouble progressing without completing them. I have all the same complaints about unit control, by far the most frustrating part of the game.

Shouldn't the tech tree unlock more options as you go through the game?

This seemed promising tech tree doesn't unlock upgrades as I complete levels. Am I missing something?

I think we have a walkthrough in the works... but in the meantime, the main trick is to go forward as you can, then go back to complete missed quests.

As for the tech tree... being a tree, the roots must first be "trained" (bought) before the more advanced "fruits" (goodies like catapults, towers and warlocks)can be accessed.

Yeah, the difficulty ramps up quickly in consecutive levels. I'm up to level 11, all on the 1.4x difficulty level. There's no one strategy that works for me, but here are some hints:

Go back to earlier levels and complete the quests. Some are very difficult, but worth it. Especially be sure to get the "reduced cost" quest.

The people complaining about the tech tree having to be restarted every level haven't played many RTS games I guess, that has pretty much been standard since the Warcraft and Command and Conquer days. Also, if you command your unit to move, you don't want him to stand and fight the nearest unit, again this is pretty standard, although in advanced games you sometimes have the option to patrol. The game was easy enough in casual mode, though I had trouble with a few of the side quest requirements (requiring that all buildings be destroyed before wave 6 or 7 with no damage to your keep). Catapults seemed useless (your other soldiers can take care of business without them), as do towers except in 2 levels. In fact, though I used the wizards and archers, I almost feel like I could have made it all the way through with footmen and healers alone. Would like to see this game with more options and more reason to upgrade tech.

Pretty much the same opinion here- controls sometimes frustrating, and still unable to complete quest 5, even though I've beaten levels up to 10 and quests 1-4 and 6-8.

What seems impossible to me is the mad dash to eliminate all enemy by wave 6, but still leave enough troops to defend base.

Why is everyone complaining about the controls? Why the controls are harder than normal, does anyone just expect to click on the enemies and have the AI sort out which one they should attack? This game is all about fine precision targeting - you have to constantly pay attention to multiple skirmishes across the battlefield in order to win. Yes you have to constantly select enemies, using careful focus fire and superior tactics to win.

And don't tell me this isn't popular. For example, combat in Starcraft is all about this: paying careful attention to your army and selecting exactly who and what to kill.

So yes you aren't expected to just throw things at your enemies until it dies. Yes this makes it a lot harder, but there is something to be respected in that.

If you read the help section in options it gives far more help than the tutorial. You can set troops to patrol and hold position by changing the rally point or grouping and hold space or ctrl when selecting where to move them. I have done all the quests up to 13 but still can not get past the last level.