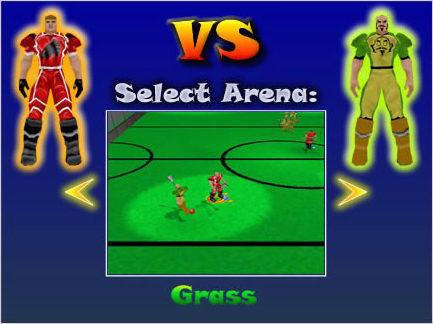 Today marks the day that the Spring quarter is officially over for me. This evening our group, for Andy Phelps' 3D Graphics Programming class, presented the game we've been working on all quarter: BattleLaX, a battle lacrosse game for the Windows platform, coded in C++ using Microsoft's DirectX (V9.0b) advanced graphics API. Our game kicked virtual butt, literally. With thanks to my team mates (Andy Lorino, Nate Rode, Delvin Mason, Mike Locke, and Pat Bellanca) our game shined like no other. It was truly amazing what we had accomplished in just 10 shorts weeks. The image above is from the menu system I created for it which even shows a small in-game screen shot. Andy Phelps has suggested we work over the summer to put the game into shape for an entry in August to the Independent Games Festival competition, part of the Games Developer Conference held each year. Good work team.

What are your guys plans with this game? Thinking about Open Sourcing it? Send me an email, I'm interested.

The game is an original idea conceived by our group leader, Andy Lorino. So, I'll defer to anything he suggests or decides towards the fate of the game. I've forwarded your message on to him.

I don't think there are plans at present of open sourcing the project, though I believe the group is pretty serious about entering it into the IGF. Following that, we'll all hopefully get jobs in the industry, which is where most of us are headed, God willing.

Thanks for your interest, Chris.

Woah! Can I play it when you're finished? Being a lax player/gamer, I can't find any lax games other than blast lacrosse for ps1, and that blows. Let me know when you're done! I'd love to play it!

If it will play on a website love to host on our lacrosse sites.

Man I would love to play your game. It looks awesome, and as there is a lack of lacrosse games on the internet you should release it. I would love to be a beta tester or something. Send me an email if you have any plans of letting people play your great looking game.