It's an age-old story. You're soaring through space in your brand new ship, approaching an asteroid belt at high speeds. Odds of surviving such a place are approximately 3,720 to 1. Yet here you are, drifting through dreamland, coaxed to sleep by the tender curls of your magnificent, luxuriously soft beard. By the time you realize what's happening, it's too late! Your spaceship is crash landed on a desolate asteroid and your face is redder than a tomato on Mars. The nuts and bolts from your spaceship have scattered across the empty expanse of space before you, floating in shimmering lines of silver and gold. What's there to do? Why, strap on your space boots and go planet hoppin', of course! This deep space adventure, now available for both iOS and Android, is about to take you Beyond Gravity. While developer Qwiboo describes the game as a kind of "platformer," in reality it plays much like a cross between Jetpack Joyride, Escape the Red Giant and Nitrome classic Space Hopper. Your simple objective is to progress as far as you can jumping from planet to planet without hurtling into the deadly abyss. Boasting simple one button tap-to-jump gameplay and an assortment of achievements to conquer, Beyond Gravity will get you hooked after a single play. 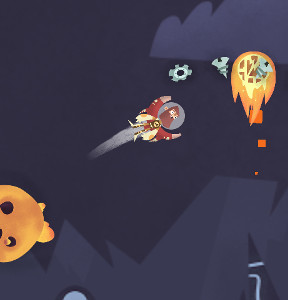 Planet jumping is trickier than you might think, but you're aided by the classic double jump and the very helpful ability to reset your jumping-off position if you make a mistake. This is done by holding the screen for a few seconds rather than simply tapping. While not a "runner" in any sense of the word, Beyond Gravity does have at least half of the "endless runner" formula which has grown to dominate the mobile gaming market. In theory you can keep on going forever—but in practice, tiny targets, fiery meteors, and your own impatience will provide deadly challenges. Trails of screws and cogs from your defunct spaceship guide the way and make a delightful tink!-ing sound when collected, much like coins dropping into a piggy bank. A counter at the top left of the screen will tell you exactly how far you've gone, along with how many ship pieces you've garnered. These bits n' bobs are important, as they are added to your "stash" at the end of each run and can be used to purchase upgrades like faster jump speed, magnetism, cosmetic changes and even the elusive triple jump. Best of all, if you're able to time your jumps so you don't miss any pieces, you'll earn multipliers which rack up the loot way faster. This becomes an essential skill as you play through the game, and this demand for perfection is part of what makes Beyond Gravity so addicting and so rewarding.

After you grasp the gameplay basics, you'll quickly notice the game's incredible art style. From the goofy grin of the protagonist to the mysterious shattered moon hanging in the sky, the atmosphere spills over with style and elegance. Adorable alien creatures populate each planet, hovering around you peacefully as you plan your next leap. The game's cheery music and delightful audio effects add to the experience, especially noticeable in the perfectly Tigger-like "boing!" that accompanies each jump. All of this comes together to create a polished package that cannot fail to impress. Perhaps the only real weakness of the game results from its inevitable comparison with runners like Jetpack Joyride. While the latter is fast-paced, powerup-heavy and designed for sensory overload, Beyond Gravity is much more relaxed and evenly paced, rewarding patience and planning rather than quick reflexes. It relies on a single, strong gameplay mechanic rather than flashy upgrades or boss battles. This is not so much a flaw as it is a design choice, but it means that the game is not for everyone. Still, for the cost of less than a bottle of water, you simply can't go wrong with a game as (space)ship-shape as Beyond Gravity. The simple and addicting gameplay will pull you right in (to its orbit). And hey, it has 300% fewer awful puns than this article! So what are you waiting for? Pick up Beyond Gravity and leap right in (er, sorry).