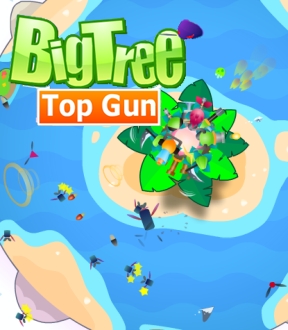 The developers at Burstyx Studio took a wacky—yet inspired—direction with the usual defense fare in last spring's BigTree Defense, one of the most unique (and possibly unrecognized) games of early 2010. Last week Burstyx released BigTree TopGun, a new turret-based defense shooter that could be described as a "spiritual successor" to BigTree Defense; the gameplay is completely different than the studio's original foray into the defense genre, yet the premise and graphics are distinctly familiar. In BigTree TopGun, you're again charged with the task of defending your "holy fruit" from evil bugs by growing your tree into a multi-branched, turret-wielding, insect-killing machine.

Unlike its predecessor, BigTree TopGun is a top-down shooter that employs the familiar "rotating turret" mechanic; enemy bugs enter the playing field from all angles, while each level the amount of enemy waves increases. The onslaught consists of a diverse array of evil little buggers that fly in erratic, difficult-to-hit patterns and possess innate abilities that make them immune to certain types of attack. Thankfully, your "BigTree" has access to an equally diverse arsenal of weapons that can be attached to 14 different points along the base of your (oddly) heart-shaped turret, in addition to the main cannon. These attachment points can angle each weapon in one of two slightly different directions as well, for even more control.

Players begin with 500 gold, enough to buy a couple "Little Cannons" or one "Strong Cannon." The "Snail Cannon," a slowing weapon, is also available for less than 500 gold. More weapons become available in later levels, depending only on the amount of cash you have, which is earned by defeating bugs and advancing each level. Gold can also be used to upgrade the power of your main cannon, increase your turret's health points and buy a variety of special abilities. There are seven of these abilities in all; each has a one-use effect like restoring hit points, damaging all bugs on-screen, slowing them, freezing them or doubling the damage of your weapons for a few seconds. The only catch is that certain bugs have immunities to specific attack types—like slowing, freezing and confusing—which protect them from these abilities, as well as weapons that produce the same effect. 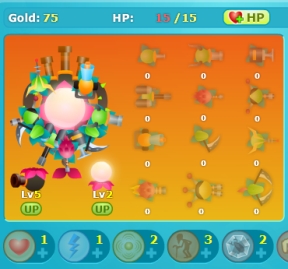 Hence, the strategy in BigTree Topgun boils down to two main factors (besides your aim): the configuration of turret's weapons and the timing of special abilities. Unlike most other top-down, turret-based defense shooters, the enemies attack so relentlessly from every direction that there's no way to defend yourself by mowing them all down with your main cannon alone; there are just too many of them coming in all at once, especially in the final waves of each level. Instead, you have to rely on your secondary weapons; both their effect and directional placement on your turret. For example, the "Fire Gun" is a short-range, flamethrower-type weapon that's great for protecting your flanks and rear. Slowing, freezing and "confusing" ("Acid"-type) guns work well on your flanks to randomly keep incoming bugs at bay while you're focusing on other areas. Other guns, like the area-of-effect "Slasher" or the homing-missile "Seeker" are less discriminate, but still play an important role in the overall configuration of your turret.

Analysis: There's more than one way to skin a cat—er, bug—in BigTree TopGun, which is part of the game's appeal. While some weapon configurations will always work better than others, there is no single "golden setup" that every player must build to beat all 10 levels. A strategy based on slowing and confusing the enemy bugs can be just as effective as a brute-force approach, depending on your play style. Granted, halfway through the game a player's turret might be adorned with a seemingly-indiscriminate hodgepodge of weaponry shooting in all directions, but amongst the chaos there's a deceptively tough method to the bugs' madness. The "Normal" and "Hard" settings prove quite a challenge and won't be conquered easily by piling on random weapons in random configurations.

Despite its fun and quirky take on the defense genre, its polished graphics and solid upgrade system, BigTree TopGun has a few flaws that might turn some players off. In addition to being relatively challenging, later levels seem to drag on a bit too long, with too much repetition. The progression might have been better suited to 20 quicker levels, rather than 10 slower ones with more than a dozen waves each. On a related note, an "auto-fire" option would have been greatly appreciated, seeing as there's no real reason not to keep your finger on the trigger. If you can get past the tedious feeling of the game's later levels though, BigTree TopGun is a rewarding defense shooter that delivers a healthy dose of novelty to a genre that desperately needs it.

Since this has fire on click with no weapon cooldown, you wouldn't use autofire even if it existed. The game turns into a shooting gallery if you have even rudimentary autohotkey-fu, and it's pretty easy even without a macro that fires twenty bullets a second.

It's mentioned in comments at Kongregate, but you can have the tree fire continuously by holding down the fire button, passing outside the game window, and then passing back in. Also, it seems like just cramming as many lasers as you can fit (around 15) is the best strategy.

I'm not much of a shooter fan, so this game didn't appeal that much to me. I did complete it, though. Graphics were good and it was fairly bug-free (had two instances where my fruit wasn't touched but I didn't get gold the first time).

Or you could just click like crazy.. much easier than macros and passing your mouse in and out or whatevers, really.. at least to me, anyways. haha.