Tell me if this has happened to you before: while on a camping trip with friends, roasting marshmallows into crispy gooey bliss, innocently toying with bottle rockets near the campfire, an extraterrestrial aircraft zooms over and zaps you into space. No? Then, you may have missed out on one of... No, not one of, but only the most exciting interstellar odyssey of your life. That is, if Bik: A Space Adventure is any testimony on the subject. And he should be, given this is exactly what happens to Bik as the titular character in Zotnip's marvelously fun classic scifi point-and-click adventure, playable on your iOS and Android mobile device or on your computer as a download. But in case you begin to doubt Bik's perspective on the subject, there will be opportunities to walk in Ammut, Tatenen and Talandra's gravity boots for a change of pace and scenery, exploring alien environments and solving the story-driven puzzles encountered along the way. While the pursuit of fun and extracurricular recreation is a perfectly valid reason to travel the galaxies, there are bigger bots to fry: join forces with the good guys as they escape Umarian abductors and Houns mobsters while stopping an evil corporation from exploiting a peaceful farming planet—the universal battle of good versus evil all in resplendent 2D pixel art. 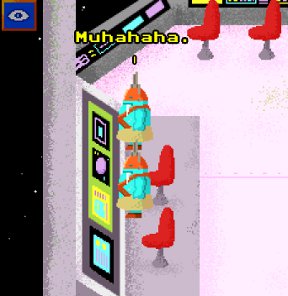 Your space adventure, as played on a mobile device, utilizes the very modern convenience of a tap (or, on your computer, a point-and-click). Tap to make your character walk to wherever you want him to go, or tap on an object or person within the scene to interact. If you're unsure where these active zones are located, use the "eye" icon in the upper left corner to have them pointed out to you. On touch, a option menu opens over the active spot: depending on the object or person and the current situation, you can either use inventory, handle, look more closely at, or talk to it/him/her. The combinations of options will be either brief or lengthy or in between. Sometimes the course of action or discussions you choose affects not only what responses you get but also what future options for puzzle solving and interactions you'll subsequently encounter.

Much of the gameplay is in these interactive options and your progress is determined by how well you can figure out what needs doing and when. Even so, there's a number of minigames in the process: shooting past a computer firewall, stealthily avoiding guard drones' detection, hacking into a force field, and similar games. Some of these minigames are vintage arcade-like but mostly provide a retro effect and pose little difficulty or challenge. The thinky part comes in deciding how to proceed and what conversational tracks to take to succeed in your missions. The game periodically saves automatically (you can load the autosaves from a separate tab in the saved game menu), but you can manually save your games before going a particular route if you wish to play cautiously. The diversity of locations to explore, tasks to complete, and a substantial plot mean there's lots to do, leading to hours of gameplay as well as good replay value. 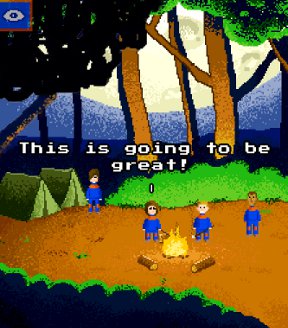 Analysis: While the essence of Bik holds true to the classic 2D adventures which inspired programmer Mike Pinto to create it, the experience of playing Bik feels original, not like retread. I'm a bit newer to the gamer scene but, as soon as I said to my friend, "Hey, look at this cool new game!" and handed him my iPad, his very first response was: "Awesome! It reminds me of Space Quest," which he proceeded to tell me all about enthusiastically. Which is probably exactly what the Zotnip team was going for. That balance between retro and fresh is hard to strike yet Zotnip hits the note at just the right beat, giving love to the past while still embracing the good parts of modern gameplay. Designer Patrick Chase might believe adventure games peaked with Commodore 64, and there is plenty of old school puzzling and mechanics in Bik to appeal to diehard LucasArts and Sierra fans, but Bik plays well and looks great on our modern devices. Holding onto conventions of the past, the inventory system tends to be cumbersome, but there's enough fun in item experimentation that—in both the failures as well as the successes in item use—the drawbacks of the separate screen/separate functions interface are overcome as it becomes an integral part of the gameplay. Meanwhile, the artwork by Neil Numberman exudes the stylistic retroness of pixelart even as it is expressive and detailed. Which is good because everyone likes nostalgia now and then, but who wants to give up the HD clarity and functionality technology has evolved to give us?

While I did experience a few scattered instances when the touch screen controls could've been more precise, specifically when trying to escape the jaws of "Chopper," I got a sense this was more about my clumsy fingers than the interface itself, and it shouldn't be an issue in the download version. There were moments I grew impatient as a story scene paused to begin or end, clock icon glaring from the upper right corner, but this is more testament to my eagerness to engage with the game than anything else. The writing in this story is entertaining and tightly woven. Yes, it has messages to deliver, both in allusions and not-so-vague euphemisms (Umarians and Squeemart execs indeed), but Bik's authors know you have a brain you know how to use and they don't attempt to clunk you over the head just to reach it. This is something I especially appreciate in a day when subtlety and story aren't always treated as friends.

Best of all, Bik: A Space Adventure is accessible to all ilks of players, whether an old school fan or a youngun' to the scene, it has everything a player could want in a modern adventure game. Here is a game that has both humor and heart, that engages the brain without arrogant abstruseness, that is unmistakably created with passion for what is best about classic adventure games while not overlooking gains made in technology.