Blade Rush is a challenging platformer with "stealth" elements by Darren Briden, and the reason I put that word into quotes is because while the game involves trying not to be spotted as you navigate levels filled with enemies that will instantly shoot you to death if they spot you, you kill those enemies by smashing into them at rocket speed like a Tasmanian Devil. Using either [WASD] or the [arrow] keys, just run and jump (and wall-jump) around levels, using the green sphere around you as a visual guide to let you know when you can hit [K] to hurtle yourself onto him and render him a bloody smear with the sheer force of impact. Which, you know. Whatever works. Finish stages as quickly as possible to get better rankings, and avoid being seen! If an enemy is alerted, they'll kill you in a single shot... and as you play, you'll find even more hazards to watch out for. 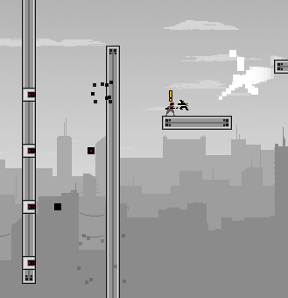 Blade Rush is sort of unexpectedly hilarious and fun, and I say "unexpectedly" because at first blush it's a very sparse and simple game. The visuals are itty-bitty and grey, and the level design doesn't offer a whole lot of variation, aesthetic or otherwise, consisting mostly of different configurations of platforms and hazards floating around. Where it starts to shine is once it takes the training wheels off, and you realise you can start triggering attacks in midair and quick succession, zipping around like a tiny murder-rocket, and using that velocity to carry you over otherwise insurmountable gaps and around obstacles. The trick is figuring out the best order to eliminate foes to do so. It eliminates what initially looks like is going to be a lot of wall-jumping and landing on miniscule platforms... though there is admittedly still quite a bit of that to be had at times. It's sort of a simplified, less cinematic Vox Populi, Vox Dei. Though it lacks a lot of variation and might be still too fiddly for some players, Blade Rush is still a clever little game with a lot of minimalistic style that would be great to see expanded in some way in the future.

The game expects the player to be able to move around extremely quickly and accurately, which doesn't work primarily because killing enemies is a completely unpredictable, uncontrollable movement that sends the player flying into spikes with no way to avoid hitting them more often than not.

I would disagree, primarily because it's just a matter of distance and momentum. You always know what direction you're going to go in, and being able to jump off an enemy you've killed allows you to either ride it across distances or leap off it immediately to avoid the scenario you're describing. It just comes down to figuring out what side to come at an enemy from. If you stand in the same place and attack the same enemy the same way over and over again, you'll get the same reaction every single time, at least as I saw it when I tested it, so I wouldn't say it's unpredictable. :)

Was anyone else just completely unable to leap off enemies? I couldn't get past the third level. Jumping when on top of them didn't seem to do anything except get myself shot.

Hi sidlowe89! Playing with both WASD and arrow keys I was able to jump off enemies. Have you tried maybe a restart of your system?

I think what sidlowe89 is asking is how to properly leap off the enemy. I've been trying to do it in a way that can get me high enough, but as I press up, up and left or up and right after killing the enemy, it has only worked a fraction of the time. And even then not at an angle I was trying to make. A more precise clarification of how to leap is needed.

Oh! Do you mean to say using wasd and control keys together works? I'll try that.

Not so much for me, unfortunately.

It's possible to chain kills, which looks like you are jumping off a bad guy. Just press X repeatedly for each enemy in range (even through walls).

You can also use the up/jump-key (W or arrow up) and either left or right after a kill.
Like: K (kill a guy; X also works which is nicer with the arrow keys), hold W and either A or D at the same time to get a jump in either direction.

Last but not least: Considering that you play a highly trained killer a control-structure that is a bit harder to handle seems fitting.

The "Drop every enemy off the stage" achievement is broken. I did it on Stage 3 (one of the only stages where it's even possible), dropped both enemies into the pit, but it wasn't awarded.

The wall jump needs to be stickier. Not a fan of wall jump mechanics that force you to hold in the direction of the wall to jump the *opposite* direction. It forces you to rapidly switch arrow directions just to maintain the direction your guy is already moving. The guy should always move in the direction of the arrow keys. That means allowing the player to hold right while sliding against walls on the left and vice-versa, to prepare for long jumps. eg: N+, Super Meatboy, etc

Voted 1/5 because the "jump after kill" mechanism sucks hard and doesn't work as advertised.
Wall jumps are poorly implemented as well, so I'll stay clear of this game.

I loved it, but I'd prefer to see invulnerability while dashing�ran into one of those bullets way too many times.
Also, don't understand why the starting positions of the enemies are randomized: a game like this should really start with an identical state each time you begin the level.