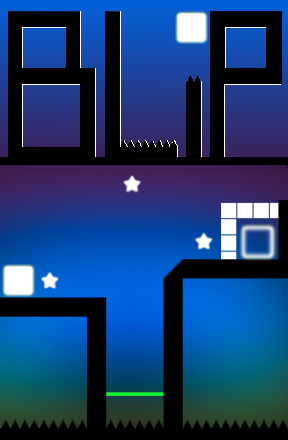 Remember that time as a kid when your skateboard hit a bump in the ground and sent you flying into the air? That was physics at work. In BLiP, you'll be using the same momentum-based mechanics in place of a jump ability, and although Blip isn't the first game to come to mind when you think of physics puzzles, that's arguably the best way to describe this clever little platformer from SquareBear Games. Using the left and right [arrow] keys to move, your goal is to collect three stars on each level, which unlocks the exit and allows you to progress.

Of course, there are obstacles along the way, mostly of the sharp and pointy variety, which deduct a life for the slightest of scrapes. Your glowing square 'character' can't jump over these hazards, and that's where the carefully modeled physics come in, allowing you to flip and spin over low walls or across gaps. Platform games without jumping usually feel restricted, but here the physics react exactly as you'd expect to give the character a surprising range of movement (for a box). The limited lives you're given to beat all 60 levels with feel like a step back, though extra lives can be collected for completing bonus stages, but if you're tired of the usual physics puzzle fare, Blip is a fun, playable, and completely fresh take on the genre.

I don't like this game. Why should we lose lives because we don't know what lies below us? That's no fair. This is a game of physics and body control, not guessing whether my next jump is to a spring or the spikes.

Woah made it with 4 lives to spare!

Missed the final bonus level which made the last 5 levels tense.

I still don't understand games that insist on this model of limited lives and dying requiring the player to start from the beginning. It is not fun to have to redo the whole game if you fail and there's no reason to keep this archaic system aside from some sort of sense of nostalgia or the misguided notion that this creates some sort of challenge that is worth having.

I found this game to be the right difficulty. I had to restart over a few times but felt that the limited lives added a necessary challenge. without the start over if you lose all your lives this game would be way too easy.

I guess my notebook isn't up to specs enough to play this? After reaching level 6, it started bugging out and getting stuck moving in one direction. Watched my box throw itself off a cliff again and again until it fixed itself, only for the same thing to happen in the next level. Makes the game impossible, of course, with the limited lives and lack of level select.

lives suck... especially with out "checkpoints" or something the game looks good... too bad I wont be playing it! Seriously weren't lives created to keep us pumping quarters into the arcade machine? why any developer uses this concept today is beyond me!