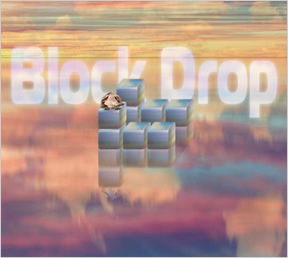 Block Drop is a brand new puzzle game, and a new direction for game designer Dan Russell-Pinson, creator of the previously reviewed Tipping Point series. Instead of the adventure games he is known for, Dan set out to create a game with wider appeal. And the game's redeeming qualities don't end there.

The game offers classic casual gameplay with simple instructions that will seem immediately familiar to many: Use the [arrow] keys to jump from block to block making them all disappear. Press [shift] to jump two spaces. As you jump off a block, it sinks away into obscurity. The objective is to make all but the checkerboard square disappear by landing on all the other squares first.

Sometimes two or more blocks will be stacked on top of one another, and they will require multiple jumps to remove completely. These stacked blocks can make it difficult to see every block, so an overhead mini-map is provided in the upper right corner of the display to help you plan your moves accordingly.

Rather than shunting you on to the next level as in most puzzle games, each level gradually transitions into the next. The end block of one puzzle becomes the starting block of the next. Hours pass gently as you progress, slowly revealing sunsets, starscapes, and sunrises.

Analysis: Although we have seen similar puzzles games before, what sets this one apart is the implementation. Apart from the usual photo-realistic backgrounds and images that we've seen in Dan's other games, the levels and even the music is all randomly generated, ensuring that every game that you play is unique. A code is generated with each level that allows you to come back to that same level, but the puzzle may be different, so sharing level codes for help with solutions is just not possible, unfortunately.

Since each level is randomly generated, the game goes on indefinitely, with each level increasing slightly in complexity and difficulty, at least in theory anyways. As can be expected from randomly generated levels, the relative difficulty jumps around a bit. A minor complaint, though, since it can be refreshing to get a slight reprieve following a more challenging level.

Uniquely engaging, captivating and relaxing—all of these things in an enjoyable puzzle game with great replay value besides.

Block Drop level codes
Levels 1-999
I found the algorithm for the block drop codes. There are a lot.
The first number is the level number. enjoy!

I'm really enjoying this game. Just got the notification email announcing it a couple of hours ago. Quite enjoyable - and so far I haven't had any problems with levels. A nice distraction. I like the music for it, but after a while I muted it and turned on itunes instead.
I like the survival levels.

So addictive! I had to keep playing, if only to watch the sky deepen to evening. A beautiful, fluid game. I enjoyed Tipping Point, too.

I don't know about you guys, but if I was a shiny gem I wouldn't spend all my time jumping around blocks that stuck out of the water.

I like the little *splash* when you jump into the water by mistake. Sometimes I do it on purpose.

Stuck on level 15 - anyone have any tips?

This is a strangely beautiful game. Love it!

There is a cheat function in the MENU in the left upper corner.

I liked until the blocks started moving.
The puzzles were nice and started to get challenging, then suddenly the timer pressure ruined it for me.
The graphics are beautiful, though

Great game! There aren't any really new ideas, but boy is it fun! The graphics, especially the backgrounds, are breathtaking, and the gameplay is smooth as silk. The music is simple, but very relaxing, and fits the game perfectly. The puzzles are nice, and the learning curve is set to the right level. It's hard to believe the levels are random! (I'm starting programming school this year, so I wonder what kind of code was used here...)
All in all, I had a very good time playing this game!

@ Hespetre:
The survival levels aren't such a big deal. There's only one of them every ten levels, so you just have to beat it to get ten more time-free levels. It's worth it!

Thanks for the tip, Donut!

Graphic and atmospheric-wise.. wonderful and soothing.

All in all, nice for a while, but after 25 levels or so it becomes a little tiresome. Nevertheless, overall feeling is very Orisinal, which is really nice.

I enjoyed the game quite a bit, but the controls are a little off. If you hold down a key a split second too long, your jewel may go careening off into the water or onto a square you were saving for later. I don't know about other people, but in a game like this, I want one and only one move per keystroke, no matter how long I hold the thing down.

I was a little frustrated. Even with the god's eye view in the top right corner, it was still difficult to navigate a lot of levels. I suppose it's hard to find the right camera angle for a game like this, but the angle it's at right now doesn't feel right.

Am I the only one ticked off that he made this instead of tipping point 5?

This game is nuts. I had to reread to see whether or not there was an endcap, though, so I guess I'm pushing some sort of record now.

After playing a little more, I had an idea: "How about a player controlled camera angle? Like, a drag the screen until you like it angle!"

That's when I realized I'd been playing WAY too long.

Like the game a lot, very soothing. I'm often in the mood for a simple puzzle game with keyboard controls, I'm just lazy like that.

Am I the only person really bothered by how when the jewel falls in the water, the ripples travel right through the blocks? weirdly irritating.

What the mini map doesn't tell you is how many blocks there are on top of one-another, which would be useful for when the blocks are completely obscured. Maybe shading the blocks on the minimap would help? lightest for 1 block, darker for 3 and so on.

I've been playing this game in my spare moments all week. I'm currently on level 62. The survival levels get much harder, especially when the block towers are almost cut off by the top of the screen. The later levels are more challenging than relaxing, but now I'm hooked!

dont even get me started ok, pick it up a bit son 108 pathetic

I need help on level 13. i need a cheat please.

How do you pass level 26

how far does it go?

and how on earth are you supposed to do those super-high levels?

I made it to level 80. I play this game on miniclip and I made it to the top ten and got 1st for the today's scores.

This is cheap, but here is the last level:

Block Drop is now available for the iPhone and the iPod Touch.

some ways of improving this unique beautiful game-
-in the over view in the upper right corner there should have been some graphical way that would indicate the number of blocks stacked in a tower.
-a real 3d interface that would let the player rotate the camera\landscape for the most comfortable view.
-an undo option!!

Just FYI: Block Drop Lite is now available on the iPhone and iPod Touch. It's free so download it now!

i can't seem to get past survival level 100, what in the world is the secret to this, somebody help please!!!!!

can anyone tell what`s the code for level 191???can`t manage the survival :/

This game is a nice, soothing distraction. But as others have mentioned it can be a bit boring after a while.

Block Drop level codes
Levels 1-999
I found the algorithm for the block drop codes. There are a lot.
The first number is the level number. enjoy!