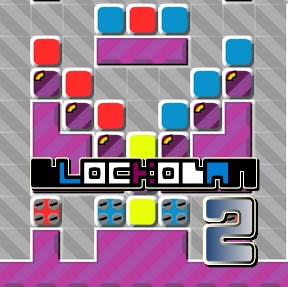 Apparently, people like sliding stuff into other stuff. You know what I'm talking about. The puzzle genre has always been a particular robust one, a hearty chunk of which consists of sliding block puzzles. Well, the folks at Bonus Level know your dark craving and offer you BLockoban 2. (Alternate titles: "Son of BLockoban" and "BLockoban 2: Block Harder".)

Gameplay is more or less the same from the original; the goal is to clear all the blocks on a level, and you do so (usually) by matching up groups of two or more of the same colour. Click and drag a block in the direction you want it to go, moving it one space at a time. There are different types of blocks that present their own challenges, but often it's the simplest looking levels that can be the most difficult. If you make a wrong move, you can start the level over by clicking the "restart" button at the bottom of the screen. The game keeps track of how many moves you make, but that's only there to taunt you. The nice thing is that if you're stuck on a particular level (or secretly terrible at the game and need to take an interesting screenshot for a title image... hypothetically), you can just head back to the level select screen and skip ahead to the next one, or whichever one catches your fancy.

BLockoban 2 doesn't do much different from the original, aside from giving itself a facelift. It does introduce a few new block types, but they don't really make this feel like a different game so much as an expansion. Which, considering the voracious appetite of puzzle fans, is hardly a bad thing, especially considering the amount of content on the dining table. As of this writing, there are 120 official levels available to play. If none of them prove a suitable challenge to your massive brain, well, get on over there and make your own. Those other levels? Chumps. We had no faith in them. Your level? Totally different. Now go out there and show us what you're made of.

... which is, uh, apparently brightly coloured pixels and bouncy techno music. Might wanna get that looked at.

...huh, is this really at all the same as the original game? As I recall, the original Blockoban was a top-down game about sliding blocks onto like-colored dots. I might just be crazy though.

Having fun with this one, in any case. Reminds me of an old DOS puzzler I had called Brix (which I think itself was a clone of a game called Puzznic).

You can move the dark purple wall block at the bottom. (I didn't realize this at first myself, so just thought I'd mention it before the full solution.)

Drop the white block in the middle first, then all the others in order from bottom to top. Slide out the purple block to clear everything at once.

you can move the purple striped block

stack in order then move the purple striped block right

But I'm not taking the merit of BLockoban 2... I'm playing it right now, it's a very nice game!

The first two sentences of this review was the funniest thing I've ever seen on this site. The game's good too.

The site is really buggy or something. Moving on to the next level without going back to the menu often doesn't work, and my progress is never saved if I go back to the menu to play another level.

Man, this has been sucking my time away. Currently stuck on 96.

Hey, thx Dora & JIG for the review. As it was said on the first comment, the game is looking like BLockoban 1 (sliding blocks) but the goal & gameplay are quite different.

Lavos, you are only half crazy.
It was blocks onto dots but it was not top down. This is a totally different game that is similar to many others out there, the first was more inventive.