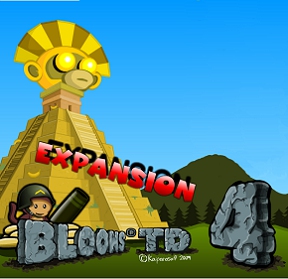 Well, by now you've probably played Bloons Tower Defense 4 to death, unlocked all the upgrades, defeated all the paths, and you've finally peeled yourself away from the computer long enough to have a life. Well, we can't have that, can we? At least, Ninjakiwi can't, which is probably why they've come out with Bloons Tower Defense 4 Expansion, containing enough upgrades to steal away all of your free time once again playing one of the most popular tower defense games out there. So popular, in fact, that it tied for 1st place in the JayisGames Best of 2009.

If you've never heard of it before, Bloons Tower Defense 4 is a tower defense game (duh!). There is a track, you see, and along that track will come balloons (Bloons). Silent. Stalking. Deadly. Your job, if you should chose to accept it, is to place towers manned by heroic monkeys along this path to stop the killer Bloons before they can wreak havoc in your neighborhood. Or, at least, the neighborhood of the current path. Each tower still has five iterations, from basic to extreme mode, as in the core game. The Bloon types are also the same. So what is new? Bloons Tower Defense 4 Expansion Pack adds exciting new levels to an already wildly popular game.

Bloons Tower Defense 4 Expansion Pack adds four new things to the realm of Bloons: 4 new tracks, from easy to difficult; a new mode known as Deflation; Tower Specialties, which is the ability (once you've satisfied certain requirements) to tinker with the costs of your defensive towers; and a super special secret surprise hidden in one of the aforementioned new tracks. But wait! Before you run off to play with the new toys, let's chat, shall we? 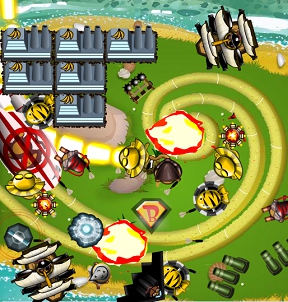 The four new tracks range in difficulty from astonishingly easy to exceedingly difficult. Each one is lovely to look at, taking you from a sandy beach to an underground lair, from a sun god temple to what Ninjakiwi is amusingly calling a Triangle of Insanity. Seriously. You will go insane. Each offers new opportunities to explore new strategies using the familiar monkey defense towers to stop those ravenous, murderous Bloons. Deflation mode is something new and interesting: you start with $50,000 to spend, and you can't earn any more. Basically, this is a mode to try out your favorite placement strategies and see if they will work. The banana farms are disabled in this mode, and once the money is spent it is gone, you can't earn any more. Once you've conquered each of the new paths at a certain level you can unlock Tower Specialties, which allows you to tinker with the costs of each tower. However, be warned, reducing significantly the cost of one tower can cause the cost of other towers to skyrocket, so chose wisely young grasshopper. As for the super special secret surprise, well, that would be telling. Here's a hint: you can find it in the sun god temple track. Enough said.

Is it fun? If you enjoyed any of the Bloons Tower Defense games then the answer is heck yeah! The new tracks are pretty to look at and different enough from the ones in the original game that you will spend hours trying to master their intricacies. The Deflation Mode and the Tower Specialties add a lot of variation to the basic strategy, changing things up enough that the casual gamer can enjoy adopting entirely new strategies for each game.

Play all the Bloons games:

Is there a downside? Unfortunately, yes. The new tracks are available immediately, but the Tower Specialties requires that you master each track to a certain level before you can use it. And as for the Deflation Mode? It's a fun and fantastic idea, but it won't kick in until you have attained level 32, which, as anyone who has played Bloons Tower Defense before knows can be a long time coming, unless you cheat and buy the level with Mochi coins. And once again you cannot save a game in the middle of a level unless you sign up for a Mochi coin account.

Despite the complaints, though, Ninjakiwi has come up with an expansion pack that is fun, challenging, intriguing, frustrating (in places), and guaranteed to suck you right back into the world of the Bloons (just when you thought you were out). Will this tide us over until Bloons Tower Defense 5 comes out? Maybe, maybe not. But it's definitely worth checking out, if only for the amusement of finding the super secret surprise. What are you waiting for? Show those evil Bloons who's the boss!

Bloons Tower Defense 4 left a bad taste in my mouth because there were certain upgrades you could only get through Mochi coins, making it a rare Pay-to-Win Flash game. Other than that, the gameplay was fun. I just hate to see the trend continue.

i would have to disagree that this is a pay-to-win (except for me(i have terrible lag and it crashes at about level 70))it just requires heavy grinding, like ginormo sword

I feel myself being sucked in by a black hole. Or is that just Bloons Tower Defense 4 Expansion? I may never live to tell the tale.

So, I've encountered the Sun Temple secret - are there others?

On the temple level, you have to sacrafice $30,000 and 40 buildings then the temple starts killing everything. Make sure to havea lot of Bannana farms so that you can rebuild your structures.

i'm upset, there is no quality setting, so it runs slowly on my computer, and i can't mute the sound

Hahahahaha!!! Just reached round 100 on advanced map and then it crashed on me! All I've got now is a white screen with a ! in a circle.

There maybe some mistakes but i'll check back through.
(Sry idk how to use spoilers_)

Sorry for double post but I have some ideas for bloons tower defense 5:(Not actually a spoiler)

Grenade thrower. Throws a deadly grenade that strips 2 layers at a time. Very slow reload time; 5 seconds. 4th upgrade, grenade clusters, when one explodes, 4 other grenades pop out and explodes on impact. Cost: 1430

Railroad train. Placed on a road. The train moves across every 4 seconds squashing and popping bloons. Lasts when 500 bloons are popped. Cost: 120

Submarine. Placed only on water. Acts like a banana farm but the submarine collects treasures every 3 rounds and the amount depends on its level. 4th upgrade, collects a staggering 10000 money every 2 rounds. Cost: 3000

Miscellaneous upgrades
Road spikes pop 20 bloons and the cost is 40.
Super monkey storm reloads every 1 minute and 25 seconds. (In BTD4 it's 1min and 45 sec approx.)

Note: The costs of the new tower types are all on medium.

Sorry the spoiler is long.