Did you know Bobby Da Arrow once shot the wings off a fly a mile away? That Bobby can turn his eyes 180 degrees and see his own brain? That Bobby invented ducks?! If you did then you've probably already played Bitnest and FlashChaz's new physics projectile action game, named after the amazing hero himself, Bobby Da Arrow. After each level you get an amazing Bobby Da Arrow fact. Between each of these is a puzzling challenge of wit and speed as you kill off the evil goblin forces and stop them from invading the kingdom. Unlike most projectile games, the enemies don't just stand there and let you use up all your arrows. Your first shot lets you take your leisure to aim with your mouse, but after that the time starts and with each quick spin of the clock, the goblins get to move closer, attack, or even teleport out of the way. You're still able to fire whenever you like as long as you have arrows, but with their movements this could mean the perfect shot has turned into a dud, or that a weaker creature has just moved into the path of your arrow destined for a more efficient target. Now add that to a game with clever little puzzles and you got yourself a doozy of a game... that is, if you needed something more than just the clever little facts you get in between. 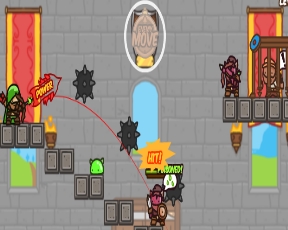 The moving enemies do in fact make this game quite different from an average projectile game like Hambo 2, and yet not a full on defensive shooter, like Zombo Buster Rising. It takes the best from both worlds, where each level has a new solution other than just firing at anything that moves, but you can't just lollygag while taking aim either. With different types of goblins that are more than just a health bar difference from each other and three different arrow types with varying effects to use wisely, Bobby Da Arrow is a great blend of two old classics that still comes out refreshing and unique. The music can get a little old but it's a little bit of a crime to mute the whole game because the voice acting is done so wonderfully. The little threats the goblins cry out and the quips Bobby chimes in with, as well as the King's instructions are little treats for your ears. So why not give it a shot? Hehehe,shot. Get it?