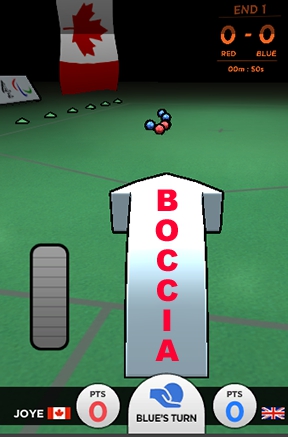 When I was a kid, my extended family would frequently head up into the mountains to my grandfather's cabin, and on a lumpy, slightly sloped lawn, we would often end up playing bocce. Half-sport, half-excuse to accidentally-on-purpose beam one's older brother with the jack, bocce could be called a member of the bowling family and involves trying to get one's own balls as close to a target as possible while preventing other players from getting their balls close. I remember being good at it, although in retrospect the fact that the adults had been cracking cold ones all day may have had something to do with my relative prowess. So it was a nostalgic treat to see a Unity game made of the Paralympic equivalent, Boccia. UK broadcaster Channel 4 hired JIG favorites Preloaded to create this game to promote their coverage of the upcoming 2012 London Games.

If you're familiar with boccia or bocce, the rules and goals are pretty much what you expect, so skip ahead to the next paragraph for the controls. For the rest of you, this is a two-player game (you can play against the computer in three difficulty settings, or do local multiplayer). A coin flip determines who goes first, and that person throws a small ball (called the jack) onto the field. This same person then throws one of his or her own balls (either red or blue) on the field after it. The turn switches to the other player, who then begins throwing balls until he manages to get a ball closer to the jack than the first player did. Then the turn passes back to the first player who must try to get closer than the other player did, and so on. Turns go back and forth until both players use up all six balls. At that point, all balls of one player that are closer to the jack than any of the other player's balls count as a point. A round of boccia is called an "end", and typically there are 4 ends in a game.

The controls of this flash version couldn't be simpler: [left] and [right] [arrow] keys to change aim left and right, [up] and [down] to change the height of the throw. A low throw might be useful for knocking balls around, for example, while a high one might jump over other balls. When you've got the aim down, hit [spacebar] once to start a power meter going, and once more to throw. 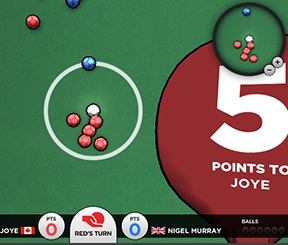 Analysis: AI is always a tricky thing to get down in games. There's quite a jump in difficulty here between easy and medium modes. My easy opponents always seemed to have been under the impression that we were playing a different game altogether, perhaps one where the idea was to knock one's balls away from the jack. I ended my first easy game with a score in my favor of 12-0. The medium opponents, on the other hand, wiped the floor with me. I was afraid to try hard mode; I didn't want to be asked how I dared to challenge a perfect immortal machine. It's too bad there isn't online multiplayer, as this seems like a game that would really be suited to it.

Boccia is a game that requires both careful planning and skillful execution. You can't just be thinking about getting this particular ball close to the jack. You have to think at the same time about what position that will put your opponent in, whether he will be able to knock your ball away, etc. All the thinking in the world won't save you, though, if you don't have the aiming skills and timing reflexes to put the ball where you want it. If you're keen on games that challenge you on more than one level, give Boccia a try.

Nice and rather realistic game! However, I find that the difficulty between easy and medium is too wide a difference. You trash the opponent in easy mode but couldn't really score against the opponent in medium.

The easy opponent doesn't even bother to block your shots with his balls unlike the medium one.

Niced to see a purely sports game here. I was wondering why JIG reviews sports games so rarely.