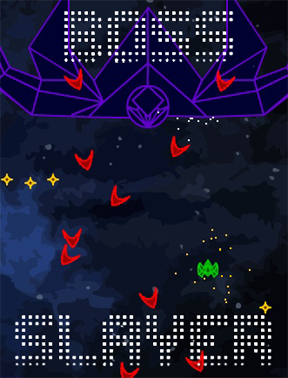 In Sergio Alonso's shiny new
bulletheck shooter, Boss Slayer, Ten alien starships have entered the solar system and you have 12 days to destroy these bad boys before they make their final approach to Earth. Why would Earth trust their entire defense to one measly little ship, you ask? Well, stow it, soldier! The Homeworld's in danger and there's no time for logic!

You can control your ship with the mouse or the keyboard, using the [arrow] and [WASD] keys. Each boss you destroy will drop a ton of health and money which you can use for
upgrades after you've died. This is the real strength of the game; each upgrade is perfectly balanced, just the right cost, just the right effect. Each upgrade has a clear, immediate effect and it can be a lot of fun to watch your weak little ship transform so quickly into a beefy alien antagonizer. Of course, if you die, you'll keep the upgrades but will have to start all over on the bosses... you need to defeat them all in one go to save the world.

Boss Slayer isn't an innovative game, but it understands the genre perfectly and serves up a smooth, streamlined experience. There's not an ounce of fat on it, which is more than you're going to be able to say about yourself after the day you've spent playing this addictive little game. Just remember to hydrate, okay?

When you're fully upgraded, the first boss gets defeated in a second. That's hilarious. XD

Really well done. Clean graphics, responsive controls, and the upgrade system gives a strong sense of progression. A couple of days in and you're tearing through the first few bosses withoutslowing down.

sink most of your early money into the money and magnet upgrades, and you'll easily collect enough money to max the rest of the upgrades.

Saved the world in 9 days! Definitely adrenaline-pumping... not exactly sure how I survived the last few levels when I had no idea what was going xD