Bottle Rockets is a downloadable indie sci-fi platform game by James Earl Cox III set to the song "Alberto Balsam" by Aphex Twin. It is a short, artistic work that's worth going into unspoiled, but suffice to say it is about an astronaut deep in space, aboard a station where things have gone seriously wrong, a daughter with a message for her mother, and the wide range of emotions in-between. Its been rated quite highly in the smattering of Game Competitions it has been submitted to, including the Nar8 Storyteling Jam, the GameJolt GlitchJam, and the "Women Are Too Hard To Animate" Jam, so expect a compelling plot, a whole lot of graphical flickering (epileptics take note), and smattering of X chromosomes to keep things interesting. 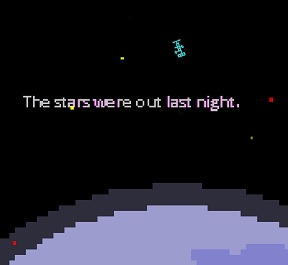 Move and jump with the [arrow] keys, making your way to the exit on through each disorienting section. Call me a sucker for emotionally manipulative stories about space, whether they're Analogue: A Hate Story or Twin Spica, but Bottle Rockets made me feel a whole bunch of feels, and I'm happy to say so. While often a glitched-out aesthetic is a distraction, existing for visual interest and little else, here it is integrated quite well into both plot and gameplay. The rapid deterioration of the space station represented well by the flickers and skewing of the screen, with the smashing jump cuts effectively moving both sides of the story along in concert. Bottle Rockets puts together a slow immersive build that, while undoubtedly swiping a few inspirations from Alfonso Cuarón (not to mention Elton John), is resonates without belaboring the themes to the point of maudlinity. It's the kind of game you'll want to play when you're in the mood for a sad song, sipping a cup of tea, and looking up at the night sky through your computer desk's window.

I played this a while ago - it's a terrific little game. The platforming's not particularly deep, but then I was also racing through it as quickly as possible just to get to the next bit of exposition. Great sense of building tension, as well.