Sometimes you just wanna jump on a trampoline. And turn three sets of reversing flips while in the air and land without smacking your face! Bouncy from monogames is an impressively illustrated arcade game that is essentially an upgradeable stunt trampoline for your iOS device. It's better than risking your cranial integrity on a real life trampoline, and you get to fight for higher scores and upgrade your equipment in the process. Plus, buck-toothed bunny! 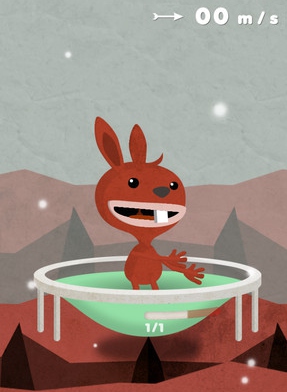 Two sets of controls let you hop in Bouncy: touch, and slide. The former will likely be more comfortable for most players, but you can switch at any time from the settings menu. With touch controls active, the screen is divided into three vertical columns. While airborne, tap the left column to flip left, the right to flip right. The center column lets you control the height of your jumps with carefully placed taps and releases. It's a lot like gaining speed in Tiny Wings, only you don't have wings, just legs and knees and bunny ears.

The goal of Bouncy is to bounce and keep bouncing until you crash, performing stunt combos in mid-air like a land-based version of Dolphin Up. The more moves you do, the bigger your combo multiplier becomes, making your score higher and higher until you unlock new bouncier trampolines. Apart from wind variables, new sights higher in the sky, and upgrading bunny colors to increase rotation bonuses, Bouncy doesn't stray too far from its core mechanics. But what's here is shockingly entertaining, and the audio/visual presentation on its own is worth the small price of entry. Go forth and bounce!