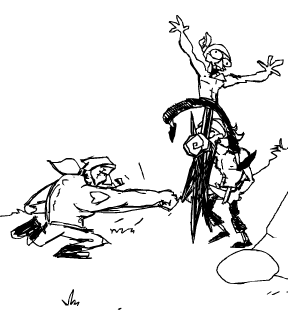 Move and jump with the [arrow] keys and attack with [A], battling your way through sailors, barrels, bosses, werewolves, and more, up to the top of the lighthouse. But watch out once you get there, because the real adventure hasn't even started! Major Bueno has become one of the most intriguing browser game experimenters this side of Gregory Weir, with each one of their games-a-month proving as consistently entertaining as they are unique. Brawlin' Sailor's sketchy style and expressive animation calls to mind an interactive cartoon, and it's short run-time makes it an easy choice for a game-break... no matter how er-ly in the morning it is?

"Makin' movies, makin' songs, and foightin' 'round the world!"

That poor puppy! I feel so sad. He should have picked it up and taken it with him. Now if you'll excuse me *sniff*, I need to go hug my dog.

Just run past the dog rather than hitting it and he'll be your little buddy at the end! No more sadness!

you can spare the puppy and sail off into the sunset with him :)

DON'T hit the puppy! He'll be waiting in your boat for you at the end, and you sail off together.

Ok, that repaired my day. Much happier now. :)

Hehe, thanks guys, we all posted that right about the same time.

Thanks that is much better :)

puppy. It put the biggest smile on my face when it was waiting in the boat.