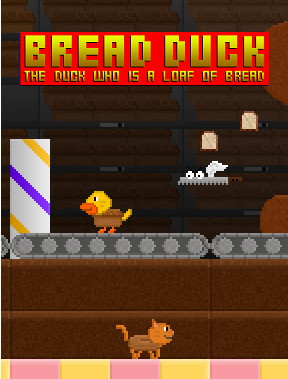 The titular star of Kyle Rodgers' Bread Duck is a duck who is a loaf of bread. Frankly though, it's just as likely that he's a loaf of bread that happens to be a duck. It probably doesn't make much of a difference. After all, if you're one to quibble about the specific phylum of creature that setting out to rescue Bagel Kitties, then games on the internet might not be the right hobby for you. But if kitty-based gaming is something you're into, then this retro-styled puzzle platformer should prove quite intriguing.

Bread Duck moves and jumps with the [WASD] or [arrow] keys. In each level, there are pieces of bread to collect, flying bread knives to stomp on, and switches to activate to further your own progress. More importantly, though, there are Bagel Kitties that you need to help get to their kitty home. These kitties walk in a straight line, and have very little sense of self-preservation, so you will have to clear the way for them. As they can walk through kitty doors that you cannot, this often means following along with them, though if they are too slow for you, holding down [Shift] will speed up the kitty's walking. Sure, rescuing them is technically optional, but could you really live with yourself if one ended up sliced?

Bread Duck is charmingly off-beat and gloriously reminiscent of a high-quality DOS shareware game that never was, particularly in its graphics and charming chiptune soundtrack. Escort-based games can sometimes be frustrating, but the kitty's consistent behavior, along with the speed-up button, makes things more about clever platforming than babysitting. Strangely, Bread Duck has a palpable Lemmings feel to it, despite the different genre. Maybe it manages to tap into the same gamer's instinct for protection and survival. Maybe it's just the adorable pixelation. Whatever the case, Bread Duck is a ton of quirky fun, and checking it out is the yeast you should do.

After all, if you're one to quibble about the specific phylum of creature that setting out to rescue Bagel Kitties, then games on the internet might not be the right hobby for you.
Tricky, how much do you know about the Internet?

I'm just saying that if you spend too much time asking questions like "Why is that cat flying?", "Why is his body a pop-tart?", "What's with all the rainbows?", you'll never hit the start button, and should probably take up philately.

Philately will get you nowhere.

anyone else having problems with randomly falling through stray bits of solid land?

jumping over spikes, hit the solid ground and just keep going down, off the map.

Yes Ashiel that happened to me in a couple of places.

To be honest I found the controls far too sloppy for me anyway, I only struggled on as long as I did because I liked the silly humour.

I had falling-through-the-ground problems as well, as well as random-loss-of-momentum-causing-death-plummets and one of my biggest pet peeves, spikes-that-hurt-you-if-you-touch-the-non-pointy-part. What really hurt was that my score was pretty much halved each time something like that happened, through no fault of my own. Made me want to stop playing, which is a shame, because I the music and visuals had plenty of retro charm (for some weird reason, I was reminded of Sonic the Hedgehog...maybe it was the sound made by spike-death, but I dunno).