Bring Me the Star

A girl (or a boy) sends a boy (or a girl) out on a quest: "Bring Me the Star," she may have said to him, "Prove your love!" Okay, he thinks, I see it over there. And he heads off after it only to find, once he reaches it, that it's only a piece, one of thirty-three pieces in fact. Thusly he goes on, using the [arrow] keys you guide the boy along a simple path, barring an obstacle to jump over here and there, a rather boring and unencumbered platform adventure by OneGoodGame so far. But the proof of one's heart is never easily done. Continually the journey is convoluted with mind-bending physics and strange puzzles to solve. The game may have been inspired by Neil Gaiman's fantasy novel, Stardust, as our hero's trials and tribulations seem to parallel the ever increasing perils that Tristran Thorn faces in his own quest for the star. Initially, as you play, you might question this assertion... delving further, the feats required to reach each star piece can be headache inducing. 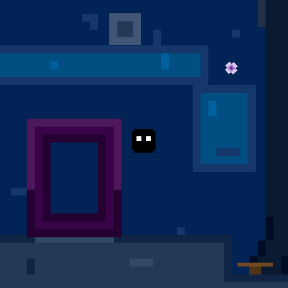 It's fun to unlock the secrets of a particular obstacle, but it's not always such fun when repeated attempts at precision maneuvering get you no further ahead. That's aggravated by syrupy controls, which has its own purpose; there are times when the legless slide is just what you need to carry on. There are also times it seems to be messing with your mind! Down is up and up is down and just when you get used to one method, another is thrown at you (controlled by pressing [S]). The exploration-based gameplay suits the theme as much as the challenge does; it does quite a good job melding its allegory, music and blocky art to enhance the fun with atmosphere. You gotta suspect that any request that begins with "Bring me" has to mean trouble, but it's just the sort of dare that can't be refused.

Play Bring Me the Star

..looked promissing, as i like platformers. But the controls are not smooth and in the upside down part it's really hard to get around...

There is a special ability that might help you get through the upside down parts.

It looks like there isn't any difference in the ending you get if you get all the shinies or not. A shame. I was hoping

that he would go with her with 100% completion.

I was so annoyed by the star bit on the bridge:

If you fall before collecting it, there's no return.

A fun game. Up until you gain the "S" ability. Then it becomes an exercise in frustration and futility. I came to a room that seemed to depend on the perfect timing of jumping and swapping gravity and I ragequit. I also didn't like that if you "jumped" into the next room, you entered it on the ground. Similarly, every room starts you at 0 velocity, so each new room you went into, you had to "accelerate" to get back up to full speed again.

I'm sorry, but where was I supposed to intuit

the parkour-style wall-climbing mechanism (i.e. the "jump between the two sides of a vertical column to keep going up" method)

Also, if you miss a star in certain places, you can't go back and get it. :/

There were just too many places where I was totally, utterly stuck, with absolutely nothing in-game that would give a hint about how to get unstuck.

The above-mentioned vertical climbing was one of them. The other was that block in the middle of nothing that you get stuck to. The walkthrough shows you going around the block like two or three times and it explodes; in reality, I had to go around about 100 times. No, I'm not kidding (or exaggerating). Tedious, boring, and infuriating.

Why do you lose all your momentum when you move from screen to screen? That's frustrating.

And early on (I suppose) a geyser keeps shooting me back up to my spouse-dot (?).

So, I'm circling the cosmic toilet bowl after accidentally (?) breaking up the big square. No key seems to do anything at this point. Help?

Oh, I see. The game was just unusually slow in giving me the

And dear god, now I am truly hosed.

this game is really nice! mostly atmospheric with a simple concept and great music. I have no problems with it. thank you for posting it JIG.