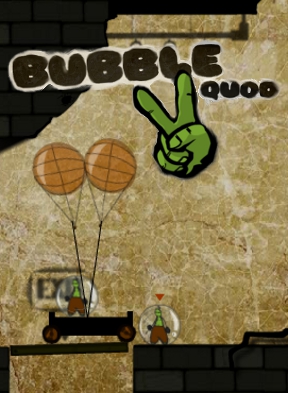 The next time you take a bath, I want you to pay particularly close attention to your rubber duckie (because we all know you have one). Now, you may think it's little more than a harmless toy, but I want you to consider that perhaps, just maybe, that rubber waterfowl is not nearly as harmless as you may think, and that lots of good men and women put their lives on the line to manufacture that bath toy. Enter Sam and William, two brothers that work in a rubber duck making factory that is so dangerous they have to wear special bubbles and dodge lethal pools of acid just so you can have a stupid yellow duck for bath time. This factory is so dangerous, in fact, that after a major accident Sam has been trapped somewhere in its labyrinthine depths. Now you must play his brother William and go rescue Sam in the physics puzzle platformer Bubblequod 2 from Garbuz Games. I hope that rubber duck makes you really happy.

In the first few levels of Bubblequod 2, you'll be going it alone, using the [arrow] keys to run and jump your way through each level until you get to the marked exit. When you come across the larger levels you can use your mouse to drag around the level and get a better view of the whole thing so you can plan out your path. And you may very well need to do some planning because you'll face more than some tricky jumps in this platformer; acid pools, weight sensitive switches, and giant rotating mazes partially submersed in water are only a few of the brain testing obstacles that stand between you and getting your brother to safety. Once you have been reunited with good old Sam, you'll also be able to switch back and forth between the two brothers using the [space] bar, because you can't have too much team work when deadly traps and overly aggressive rubber duck enthusiasts are in play. Just be sure to get both green guys to the exit alive and well.

Bubblequod 2 offers quite a few improvements over the original from updated graphics, to a more engrossing story, to a slightly less insane physics engine. In a way, the physics at work here are a little reminiscent of those employed in Gish, though admittedly not nearly as versatile, and yet sometimes just as frustrating (PROTIP: if you feel like you're having issues getting a jump to come off properly, try letting your character come to rest for a brief moment first, and then try. This will give the bubble a chance to make full contact with the ground). Perhaps the greatest improvement in this well done sequel is level design. While there are fewer levels in this outing, they are considerably more focused, employ a much wider array of obstacles, and can be quite clever. So go on and enjoy this nicely executed blend of action and brain teasing. I mean, your rubber duckie fixation put our heroes in this mess, you might as well enjoy the ordeal they must face getting out of it.

Perhaps the most annoying feature in the game

is that you cannot run and jump! So frustrated with this game I had to give up.

Yeah, another sequel, I loved and won the first game, hope I like this.
Thanks JIG.

Yeh, bouncing when you move too fast is tiring. I missed far too many jumps due to that mechanic.

Also, is anyone else getting mikado adverts while playing this game? or any other adverts...I couldn't find any other cause.

You can run and jump, but the dude need to be facing right side up at the time of the jump. But considering it very tricky to time then yeah, no reliable to jump during a long sprint. It was abit annoying but also helped restrain me from doing crazy moves. No biggie imho. :)

I found the game easy and entertaining, because of nice graphics and fun game mechanics. Most levels really only had one element or device to figure out, with only a few steps required... which made restarting easy as there wasn't alot of steps that needed to be repeated to get back to where you were. Quick, painless and fun.

The game is split into multiple rooms. I think I would have connected more and felt it more like a big adventure (escape?) if it was one big scrolling continuous world rather than rooms. (With save points where the rooms transitioned).

The one thing I will complain about is this: in what strange, twisted, incomprehensible world do you create a game--a keyboard-controlled game, at that--in which R doesn't restart the level?

Finished the 24 main levels, but only by ornery determination and bile. The controls were way too unpredictably sloppy (perhaps because of the non-upright orientation someone mentioned?) to be really fun. Skipping the bonus levels, as I've had enough.

On the plus side, the production and presentation was great. And the puzzles were pretty enjoyable. But I cussed a lot over getting the guys to move the way I wanted them to.

I've fallen and I can't get up. My friend is trapped in a ditch in level 4.

I can't beat level 11 because it won't run smoothly. Is anyone else having this problem?

There's a definite feel of the Oddworld games in the backdrops and sounds for this one (as opposed to the original). I like it!

There's an irritating bug, that forces the characters to keep running in one direction, despite about 16 resets