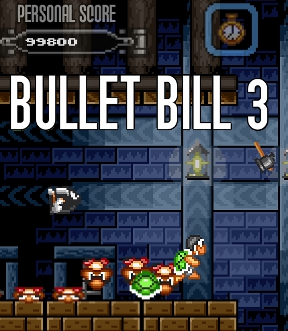 It'sa me, Bill!... well, honestly, who needs that little chubby guy anyway? After over five years, Psy City brings Bullet Bill 3, the sequel to their original games about everyone's favourite projectile hero. The goal in this incredibly fast-paced arcade avoidance game is to guide Bill, a bullet you're probably familiar with, safely to the end of each stage without hitting anything you can't break through, like bricks or an enemy. Bill follows your cursor, so think fast and steer him around obstacles as they appear on screen... and we mean really fast, as since Bill was just fired by a cannon, he isn't exactly out for a leisurely stroll. Fortunately, each stage has checkpoints, so if you make it far enough the slamming nose-first into the side of a cliff isn't going to set you back all the way. Besides, you've got infinite lives, so the only thing holding you back here is your own patience.

This time around, Bill's also got a new trick up his sleeve in the form of abilities, such as being able to slow down time, he can unlock and use when the meter at the top of the screen is full. Additionally, if you choose to pick up keys you'll find in certain levels, you'll be chased by a malevolent grinning mask for the rest of the stage, but be rewarded with a new character to play as with different abilities to boot. If you're feeling crafty, you can even take advantage of the included level editor to build obstacle courses to torment others in. After all, what better way to tell a friend "I love and appreciate you" than something that makes them want to throw their mouse off a cliff? Create then share your level codes in the comments.

Bullet Bill 3 doesn't really feel drastically different from its predecessors. In fact, if you've played the originals, a lot of what you'll encounter from the style to the level layouts will strike you as very familiar. You'll encounter new enemies, however, and the unlockable abilities and characters add a nice bit of variety. While the controls do feel more responsive, which is a must for a game that interprets holding still as some sort of personal insult, it would have been nice to have the option to set the game to auto-pause if the cursor ever left the gameplay window. Still, if you're particularly dexterous and patient, you'll probably find a lot to like here. Watching enemies set off massive chain reactions is satisfying, the soundtrack is catchy and loud, and hey... who doesn't love a protagonist who fights things with his face?

Well it was interesting to play as the bullet, but the boss level was a little frustrating. That might just be because I'm trying to play with an old laptop touch pad rather than a proper mouse though.

My son loved BB 1 & 2, and he loves level editors so he was very excited to play this last night. He was stuck on the first boss fight.

Today, the game won't load. It goes through the ad to the Loading screen, but it's frozen there. (Using Chrome on Vista.)

[Try emptying your browser cache and reload. I'm not seeing the same issue, but then I can't test on Vista, I don't have any computers with that OS installed. -Jay]

Hmm, how do I feel about this game?

Well, the music is very good; the graphics are largely stolen, but it wouldn't be the game it is without appropriating nostalgic icons.

Gameplay...well, it's kind of fun rushing across, smashing through blocks and enemies, but honestly, more than half the time when I crash into something I feel like I've been cheated. That is not a good way for a game to make a person feel. I find myself disliking most the "one hit and done" system, which I think is how I've always felt playing games from this system. I would like far more to have something like a limited number of lives or hits that start you back right where you were. Or at least to be able to throttle up or down the speed at will, the screen just moves too fast to react to a lot of what's in the later levels.

And then there's the whole keys and bosses thing. It is simply not possible to survive any of the boss fights while holding a key. The mask is WAY too hard to dodge while dealing with ANYTHING else, because it actually follows your movements mid-attack, and it really ends up feeling like a trap baited with the prospect of other unlockable characters which might provide some more preferable gameplay options.

Yet despite those complaints, I played the game all the way through anyway. So I guess that means I do like it on some level or other. Just...not enough to play it again anytime terribly soon.

Fighting boss while holding key is almost impossible for me. I manage to unlock character with key in world 1&2 but I gave up playing this on world three. I'm not sure the game is too hard(with key) or I'm just simply no good. It's kinda fun anyway.

Here's the code for my level "The Challenge"
Even though the beginning may look VERY easy, beware...