Think you know your urban legends, boils and ghouls? Think again. All Christine wants is to spend a romantic weekend alone with Patrick and her enormous 1950s bouffant. (Sweet!) She thinks she has the perfect place; her parents' old cabin, deep within the woods. What could go wrong, so far from civilization? Well, as it turns out, a little bit more than replacing the key to the front door. Where is Patrick? What's happened to the interior of the cabin? And is Christine as alone as she thinks she is? Turn off the lights, turn up the volume, and get really close to the monitor to experience this scary and stylish retelling of *grabs you by the shoulders and shrieks* Campfire Legends: The Hookman! Aiiiieeeeeeeeeeee! 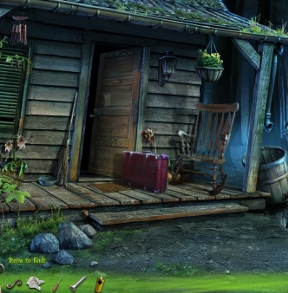 The Hookman is more of a traditional point-and-click title than a hidden-object game. While you'll find yourself rooting through various locales to find objects, every single one you dig up has a purpose. You'll hunt down supplies to repair a radio, look for pieces of a torn-up memo, find the misses pieces you need to complete a stone puzzle... no hunting for six roses, a rubber duck, and the ace of spades for you, no sir! It's strictly logical item finding in everyday scenarios. (Well, minus a forbidding crypt or two.) While hidden-object enthusiasts may be disappointed to this no-nonsense approach to the genre, those of us who prefer logical item placement and a good story to giving our eyes a workout will embrace it with open arms.

A magnifying glass when you move over an area means you can click for a close up view, and adding an item to your inventory is as simple as clicking to pick it up. When you've assembled all the items you need, indicated by the list at the bottom of the screen, you can simply drop them from your inventory onto the puzzle you're working on to use them. While most puzzles are as simple as using the correct items in the correct order, there are a few that can test your brain's mettle. Fortunately, the fireflies you can find throughout the game not only point you towards a missing item, but can also be used to get hints on puzzles or skip them entirely.

A big part of what makes The Hookman so enjoyable is how well made it is. Not only is the voice-acting above standard, but the art here is absolutely beautiful, with detailed environments that sends prickles up your spine even as you admire them. The characters themselves, while occasionally looking a little rubbery, are actually quite expressive, and it leads to the terror and frustration on their faces being that much more palpable. Special attention is also paid to sound effects and music, which greatly enhance the atmosphere... Oh! What was that creaking sound?... I'm sure it's nothing. Hey, why don't you go explore the woods without a flashlight while I take a shower with the window open? Everything I need to know about life I learned from old '80s horror movies!

Analysis: Oh, Christine. How effortlessly you embody every bobble-headed horror heroine in ever horror movie, ever. You'll find she does a lot of questionable things simply because the story would end if she didn't. Hey, Christine! Wanna check out that strange crypt, all alone and defenseless? Sure ya do, atta girl! While more realistic, a game about a girl who stays put in a safely, brightly lit area until help arrives wouldn't be terribly exciting. The Hookman manages to succeed by evoking the sort of delightfully cheesy, spooky thrill a lot of us will be familiar with from the sleepovers and camp outs of our childhood. (And is even more delightful for those of us who grew up with a little show called Are You Afraid Of The Dark?) 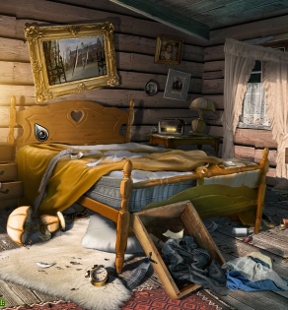 And when the game does decide to scare you, it can be pretty effective about it. Granted, The Hookman tends to resort to loud, startling visuals or sounds to make you jump, but it also doesn't neglect the more subtle routes either. Shadows flicker by in the background. Crows take flight suddenly overhead. Something surfaces from beneath the shallow waters of the lake shore and the monster standing RIGHT BEHIND YOU REACHES OUT AND GRABS YOUR NECK, ayieeeeeeeeeeeeeeeeeeeeeeegh!... fine, fine, I'll stop. Sheesh.

But the biggest problem most people will probably have is the length of the game. Weighing in at around four hours for your average gamer, The Hookman is perfect for a night of creepy adventure, but probably won't last much longer. If you demand a lot of time or replay value for your buck, The Hookman may not be the game for you. And while most of us will see the ending coming a mile away, given the details of the original legend the story is loosely based upon, it still feels abrupt and a little unsatisfying after all the build-up.

Also be sure to check out the sequel to The Hookman: Campfire Legends: The Babysitter

As the first title in a planned trilogy, The Hookman sets the bar high for future Campfire Legends games and establishes the series as one to watch for fans of scary adventure games. A little bit corny, The Hookman is best enjoyed with a sense of humour and a love of old urban legends. With more love and polish put into it than other similar titles on the shelf, it's easily worth a look for anyone who can't resist a good scary story and can take a bit of cheese with a smile.

With thanks to Kayleigh for the walkthrough. :)

With thanks to Kayleigh for the walkthrough. :)

Now this is how hidden object games *should* be done. No finding random inexplicable junk, no searching through the grain on a plank of wood for the outline of a key you are looking for, no miscellaneous objects that defy the laws of physics, and a good bit of puzzling to break up the hunting. This is a rare gem, and it would be well worth the price tag were it not for the dissapointing length.

I estimated the gameplay length conservatively because I know some players may just burn through it. It may take you longer, or not. I do recommend that anyone interested at least try the demo, so you can see whether or not you're interested in playing all the way through, and how quickly you feel yourself progressing.

3 orange rated games in a row. Those this have anything to do with Halloween?

Lots of "cheap scare" trick is used on this game, really made me angry.

So why cant I get to read the walkthrough?
[Make sure the page is fully loaded, then you should be able to click on the spoiler tag to open the walkthrough. Try refreshing your cache. (control+F5, in most browsers) ~Kero]

I still have not found the walkthrough........All I get,when going to the walkthrough, is taken from one place to the next, (in search of Campfire Tales/Hookman) Is there anyone here who can help?????

[Edit: The Campfire Legends: The Hookman Walkthrough is found on this very same page, just above the comments. Here's a screenshot of where to find the walkthrough (it's from another page, but all our walkthroughs are located in the same area of the page): https://jayisgames.com/images/walkthrough-location.png I hope that helps you. -Jay]

I AM liking this game, but is anyone else having technical difficulties? Or is it just my computer? After a little bit of gameplay, it starts getting really slow.. making it hard to move my cursor around. At first, I just opted out of the game to save my spot and return later. BUT after one point in the game it keeps making me repeat tasks that I should already be past. So I kept trying to go, and the game then crashes (runtime error). I tried to make sure nothing else is running while I play the game but its still taking up too much.

ShhQ-technical issues
When I was reading "runtime error" I thought at once, you might have bought the game from BigFish Games. After an update of their game client, a few customers experienced this error with a few games. BigFish Games solved the problem and will give you a special update for your game client, when you contact them.

I have hooked up all the wires under the hood of car but no matter what order i put them in, the car won't start. They are tighlty secured. anyone have any tips?

Why does my gear turn to the left now?! It was turning to the right and I was able to slide the numbers into the bulge, but now since it turns to the left I cannot move any number into the bulge! What's the deal?!

Sorry, I do not get the problem right now. Why can't you push the numbers inside there anymore?
Doesn't it stop at the proper place?

Did you play it the second time through now? Or did it suddenly change direction?

Hope someone can help me :-)
when i try to take the matches or the candle in de cellar it won't work
is it a bug in the game or am i doing something wrong ?

how do you light the candle ?

how to light the candle
As I do not exactly know which candle I recommend a look into the walkthrough on top of these comments. When you can't find help there please come back and I will find out how to help you.

That was fun, I LOVE cheap thrills! The cat in particular scared the crap out of me. Short but very challenging game, I really enjoyed it.

My game doesn't fit the screen making the clues useless. Now what? I am stuck and don't have access to clues...

If your game is too big for the screen, have you tried adjusting your resolution or playing in windowed mode? If that doesn't work, I'd suggest contacting support where you bought the game. Good luck!