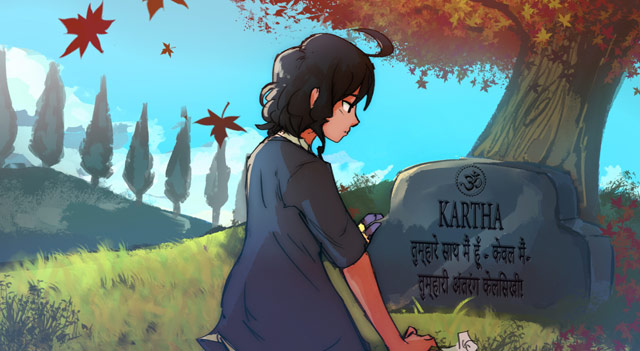 Out of a bunch of visual novels I've checked out recently, Cautionary Tale is probably one had some of the most work and love poured into it. Despite the name, there are actually three stories contained within this game, and quite honestly, any of the three could stand on their own merit as an independent game. These narratives are as follows. First, when Alex Kartha is given a full scholarship to attend a prestigious boarding school, she hopes she can finally leave behind the things that have haunted her ever since a fatal car accident involving her and her parents. Second is what seems an ordinary winter day, with Eli about to confess to his childhood crush. And finally, you'll experience "The Flood," the story of a girl about to become a woman about to turn eighteen, having vivid nightmares of the apparent impending doom of becoming an adult.

There's a lot to unpack in this game, so we'll go through a bit of each without spoiling too many of the details. In "Beyond Yesterday's Grasp" you take on the role of main character Alex at her new school. In a surprise turn of fate, she received a full scholarship and was able to get in at the last minute. But there's more than meets the eye to Alex. In a tragedy that occurred when she was much younger she lost both parents and an arm in a terrible car accident. Although she received a prosthetic arm that enables her to function fully, it turns out to be a bit of a curse, an attractor for paranormal activity. For some reason it acts as a conduit from this realm to the one of normally invisible ghosts and spirits, and enables her to literally hear their voices. No one she's told has ever believed her, her voice drowned out by the howling of spirits demanding favors so they can cross over. But surely there are no spirits haunting the school dormitory she'll be moving into, right? Will she be able to make a fresh start with her life, and maybe make some friends at the school too?

Next up is "Let Go." One cold winter day, Eli is finally ready to confess his love to his childhood friend. Despite the fear of rejection, he practices (maybe more than he knows!) to make sure he can get it perfect. With an underpinning of dark comedy, it soon becomes clear that the two lovers are bound to repeat the same day, with different "first" dates, over and over, Groundhog Day style. There's got to be a way to break the loop and move on with life - if that's even what you want? This second parable is about a confrontation: when you've waited so long for something you want to have so little of it before it will slip through your fingers, do you savor it while it lasts and slowly release it, or go down fighting like hell for every last minute of it? 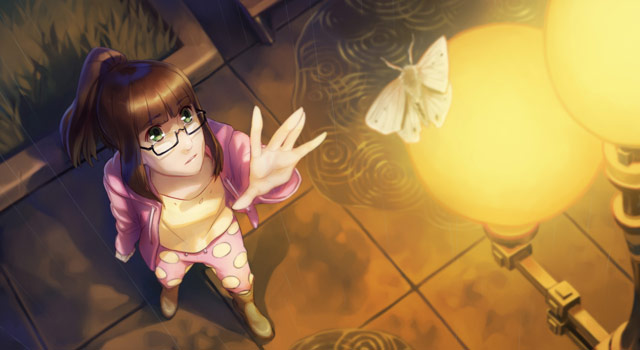 If your adventurer-sense isn't yet tingling like crazy, there's one more tale on deck to whet your appetite. "If in Your Dreams; the Flood" recounts a teenage girl's journey from the fringes of adolescence to the cascading reality of adulthood. All throughout childhood, she's had the same nightmare: trapped in her room but underwater deep under the sea with water dripping in. Every night, the level of the water moves slowly higher, and it's almost to the point that it will engulf her completely, drowning her. But tonight is the eve of her 18th birthday, and Ophelia has decided to fight fate to avert facing the terrors of the water once more.

In a desperate struggle to avoid one more iteration of this horror, Ophelia has decided to force herself to stay awake for the entire night. It isn't off to the most brilliant start, however, when she is abruptly woken up inside a diner by a middle-aged woman ready to close the place and threatening to throw her out. Reluctantly, she exits and heads out the door, beginning to wander around aimlessly amongst the streets. It isn't long before she spots a companion for the evening that at first appears quite unusual. A moth flutters around outside, hopping between the streetlights and different points of light. Though it hovers over each of them before moving on, it never stays in one place all that long, an allegory to what Ophelia sees in herself. She decides to follow it around, and as she does so, discovers all sorts of people and listens to their stories. But even still, the one burning question remains unanswered: what will happen to her when she ultimately falls asleep again?

I enjoyed a lot of different aspects of Cautionary Tale, but one of my favorite was the professional-quality voice acting. Aside from some lines of internal monologue - which are printed just the same in the story but intended to represent the character thinking/talking to themselves - the stories are enriched by full voice acting for the entire cast of characters. There's great character development throughout the course of the tales, along with lots of details that serve well to compliment the backgrounds and art, which are also beautiful. The three stories contained in the game are anything but carbon copies of each other. As a matter of fact, there is a sharp contrast between them - for example the branching nature of "Beyond Yesterday's Grasp" and the façade of apparent free will in "Let Go" as even an infinite range of possibilities will eventually be subjugated. The grammar and style is also nearly flawless, showing a lot of care in proofreading the ~60k words of text, holding it to much higher standards than similar works in the genre. And if all that's not enough, there's a diverse collection of songs within it to help set you in the right mood as you play.

To play Cautionary Tale, you'll mostly be navigating through dialogue (advancing to the next line of text) and making choices that effect the outcome of the story. You can use either the keyboard or mouse click to move through dialogue, and click the option you wish to choose when prompted to do so. A plethora of saves is also available, which may be useful particularly for the branching nature of "Beyond Yesterday's Grasp" to enable you to get all the endings and explore different paths. The only criticism I would really have with Cautionary Tale is that the ultimate framing of the three-story narrative seems weak. There's just not a strong, compelling enough narrative voice to tie them together or to present some overarching theme. I didn't realize it until I went back and re-read the game description that in fact this theme is that of agency and how the three main characters choose to act on it: which does make sense under the full context of the stories. True, the narrator in question does speak in some sense about each of the three stories as ones presented to them as a child. And the argument is that as they grew, these stories became more of a transparent life lesson to which one can mark their achievements or failings up against. Unfortunately, unlike the rest of the novel, no illustrations accompany the narrator aside from the crackling fireplace in the background. There's not enough there to really appreciate the narrator as a person with their own genuine tale as opposed to an agent to convey the information. It's a little bit of a shame because it feels like another hour of effort and a couple more pictures could have gone a long way. I am also curious about the promised "bonus" for completing all three of the games, as I did not seem to find anything extra - perhaps this is what I am missing. Nevertheless, it does successfully capture the imagination, and I suppose there is a point to be made that the best kinds of stories are the ones where your mind has to fill in some of the details.

Note: Some of the content in Cautionary Tale, particularly in the first story, "Beyond Yesterday's Grasp," deals with difficult themes and adult-themed content. Despite the storybook appearance, it may not be suitable for children and it is recommend to exercise your own judgement before playing if you are sensitive to this type of content.