Here's a novel idea: do something with the match-3 genre that's fun and interesting! Cave Quest from MD Studio combines a number of familiar puzzle concepts with a smattering of hidden object and adventure scenes. It's all laced together with a shoestring storyline that keeps you moving from one area to the next, solving simple inventory puzzles and swapping tiles like nobody's business. It's something fresh and interesting to try out, especially if you've been around the match-3 block a few times! 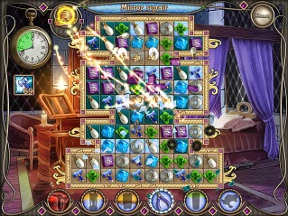 Isabella's family loves to explore, but when her parents fail to return from an expedition, she gets worried. Heading off into the snowy hills, she realizes they haven't been seen for a long time, and even worse, her brother is missing as well! Seeking help from the natives, Isabella learns of a castle hidden deep within the mountains rumored to be guarded by evil spirits. With little more to go on than ancient legend, she and her friend Mike head out on an adventure through the blizzard, digging deep into the caverns beneath the wintry hills.

Cave Quest flips back and forth between short hidden object scenes and slightly longer match-3 rounds, each relating directly to each other and the task at hand. For example, you'll start by clearing a path on a puzzle board so your explorers can pass through a cave. Once outside, you'll discover a new use for that pick you found: removing ice from a staircase. You can't clear the steps without completing another puzzle sequence, however, only this time you'll be matching tiles to remove ice blocks from the grid. Complete this and you'll go back to adventure mode, moving from area to area via the map, finding a few hidden objects in one scene and talking to important characters in another.

The variety of match-3 games in Cave Quest is impressive, and each one only last a minute or two, so you never feel bogged down by any single game. The hidden object scenes are short and very easy, requiring you to find just a few items that are rarely well-hidden. A hint button is almost always available in case you get stuck, but the characters in the game tend to spell things out for you, so that rarely becomes a concern. 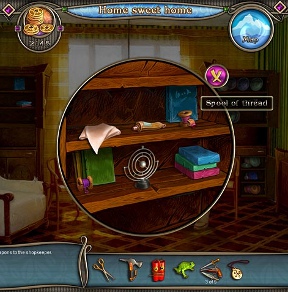 Analysis: Just when you think every possible genre hybrid has been done, one more combination pops on the radar. Cave Quest's blend of hidden object and puzzle games has been done before, but never as successfully as this. The casual design keeps you moving between scenes at a quick pace, making sure your brain is engaged at each task at hand. You're never really challenged by any of the puzzles, unfortunately, but somehow you're always compelled to keep playing, just to see what's around the next corner.

The best part of Cave Quest is how in integrates some light RPG elements into the mix. There are battles with monsters where you must take turns matching tiles to deal damage. They're easy, no-frills battles, but when you first encounter them you'll be pleasantly surprised! There's even a merchant that sells power-ups for use in the matching portions of the game, something you rarely see in a puzzle game of this nature.

Strangely enough, the visuals in Cave Quest look quite good. The colors seem a bit surreal at first, but once you see things in motion, especially tiles hopping in 3D during the puzzle modes, you'll realize just how crisp and clean everything looks.

The story is basic at best and not very original, though you really don't mind once you get in to the swing of things. The dialogue is similarly hokey, with awkward lines and stretches of text that are little more than exposition. Again, this isn't meant to be a moving game filled with emotional content, so all story elements are there simply to move you from puzzle scene to hidden object scene.

It comes across as somewhat awkward from time to time, but Cave Quest displays some solid design with an intriguing combination of genres. There's a lot of variety, the visuals are excellent, and the story, while thin, is admittedly pretty entertaining. Play it when you're ready for a match-3 game that does more than ask you to swap a tile or two.

Really LOOOOOOOOOOOOVE Cave Quest. Hoping number 2 is on its way !!!!