Chantelise: A Tale of
Two Sisters

Life isn't easy for fairies. You have to shop in the newborns' clothing section, you leave messy dust everywhere you go, people think that by shaking you around and sprinkling your dandruff on themselves that they can fly. It's a tough life! This is a situation that our heroines Chante and Elise are learning about firsthand in Chantelise: A Tale of Two Sisters, a new action-RPG developed by EasyGameStation and published by Carpe Fulgur. Sound familiar? They should, because the same two teams brought Recettear to the English-speaking world last year! 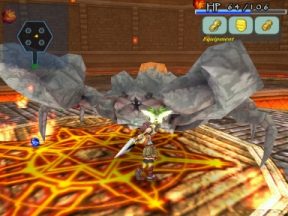 Chantelise could be seen as a sort of "prequel" to Recettear with different gameplay, but you'll recognize a lot of art, items and monsters from Recettear. Chante and Elise head out one night under an ominous red moon when Chante is mysteriously cursed and transformed into a fairy. In the hopes of returning Chante to her human form, the pair journey to a small town that's hiding its share of secrets. Dungeon-crawling and adventure await!

You control Elise, the younger sister, while Chante the older-sister-turned-fairy follows you around automatically. Ideally you'll be using a gamepad (a standard Xbox 360 controller works great!) but if not, you can move around with the [arrow] keys, attack with [Z], jump with [X], cast spells with [C], lock the camera with [V] and control the camera with [A] and [S]. Pressing the attack and jump keys together allows you to perform a quick evasive dash that comes in very handy during boss battles. Naturally these controls can be customized as well.

Elise is armed with a sword that she can use to bash monsters, but it's generally a lot more effective to cast spells with Chante instead. As Elise pummels bad guys, magic stones go flying all over the place. Picking these up allows you to use various types of magic based on the stones you grab. For instance, red stones produce fire spells, blue stones tend to be water, green stones are thunder or wind and yellow stones are physical or force-based.

You can also combine various stones to produce new effects. At first you can only mix two of the same color stone, which will usually result in a more powerful spell similar to what you would get with one. Multiple red stones produce cluster grenades and fire walls, multiple blue can freeze enemies or heal Elise, multiple green produce more powerful blasts of lightning and multiple yellow can boost Elise's defense. As you progress through the game you'll unlock new spell combinations to use. 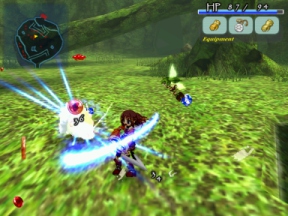 With sword and magic you'll adventure through a variety of dungeons. Generally you'll need to clear all the enemies out of each room to progress. Each room also has hidden treasures to discover and at the end of each dungeon you'll fight a powerful boss monster. Between adventures you can shop in town for upgrades — unlike many similar games, Chantelise doesn't feature an experience-based leveling system, so buying upgrades in town is most effective way to improve your character.

Chantelise is presented in a unique 3D style. While the action takes place in a three-dimensional world, most of the characters are actually two-dimensional sprites. This gives the game a striking look, but it can take some time to get used to lining up Elise for attacks since she doesn't actually have any depth.

Analysis: As the "prequel" to Recettear, Chantelise shares quite a bit with that title, most notably its adorable art style, engaging gameplay and hilarious translation. One aspect that the games also share is a remarkable level of difficulty. Elise is fairly fragile and weak unless she's equipped with the proper accessories, which you'll need to switch often to address the types of enemy you'll face. As if this wasn't enough, for the first two hours or so of the game it's impossible to heal without using random and infrequently dropped items. When you finally gain access to healing magic things become a bit more reasonable, but the first couple dungeons are surprisingly brutal and might require inexperienced action gamers to restart a few times.

While the action in Chantelise is excellent despite the difficulty, the real highlight of the game lies in the fantastic story and dialogue. While the plot is fairly standard, it's played for laughs, with Chante threatening to kick people in the shins on a regular basis and Elise doing her best to keep her violence under control. It's all incredibly charming and it does a great job keeping the game fresh.

Fans of the action-RPGs of the PlayStation era will find a lot to love here as it plays a bit like a lost gem from that time. Anyone who enjoyed Recettear should certainly give Chantelise a shot as well. All in all, this is a solid title and deserves a look — just make sure to clean the fairy dust off your keyboard after playing!

Just got done messing around with the demo.

Seems like a fun enough game... but... my god, that low health beep. It's quite possibly the worst thing I've ever heard. No, seriously, like nails on a chalkboard, and it's by far the loudest sound in the whole game. Somehow between its hateful pitch and my fancy speakers, it's actually making my fillings hurt, and rattling stuff on my desk.

Does anyone have any idea how to disable it? I tried looking for something simple like a .wav file to replace, but, no dice. I'd really like to give this game a fair try.

This really isn't a new title as I first played it over a year ago.

It's a cute game and definitely does capture some of the feel of Recettear. Personally, I found the view (not the controls) to be very difficult to deal with, as you are just too zoomed in to the character and it makes navigation a pain. That's probably just a me-gripe.

I found the stone mechanic to be pretty fun. It does add a bit of strategy where sometimes it's best to avoid a stone-drop (the dungeon crawler in me screaming "Pick it UP!") in order to ensure you have a good combo for the future.

Zazazu, I don't know if you're talking about the EGS Japanese version or the DHM Interactive version, however this is a completely re-translated and somewhat re-polished version of the game with the translation done by Carpe Fulgar of Recettear fame, and EGS has worked with them to get the game a bit more polished.

I have played the demo and while I liked Recettear a great deal, I found this to be a little rough around the edges. Difficulty is one thing, but it felt as if the attacks were rather difficult to dodge without just standing back and throwing spells.

I can't forgive the annoying "BEEP BEEP BEEP" of the low health meter... I dislike that in most games where they have something like that and this one sounds worse than just about any I have heard.

I very much agree that the beeping is by far the worst part of the game. I ended up spending a small fortune on health upgrades just to avoid it. Other then that though, the game is a lot of fun, but as a melee enthusiast, the boss fights were somewhat disappointing, since the strategy was usually to destroy object or kill the mobs the boss spawned in order to collect gems, then launch spell after spell at them, with only a little strategy in terms of avoiding their rather punishing attacks.