Aaaah! After ten thousand years I'm free! It's time to review Chroma Squad, the parody-tastic indie strategy RPG from Behold Studios that pays loving homage to certain "teenagers with attitude"-flavoured sentai shows from our youth. Well, my youth. Maybe not yours. Kids these days. As the game begins, you find yourself in control of a disgruntled group of stunt people who are sick of just going through the motions in their work on the set of a super ranger TV show. They do all the hard work while the actors sit around, the director couldn't care less about making the show, y'know, good, and it's the same ol', same ol' every single day... until they get the bright idea to start their own studio! Of course, the actual running of it is up to you. You'll need to hire actors, of course, and make episodes to fill the contracts you sign, upgrade and craft new gear to make truly spectacular storylines, and of course, handle your crew during battle! It's a retro-fied send up to all the glory and goofiness of pop culture wrapped around an easy to pick up and engaging turn-based strategy RPG system. What more could you need, apart from some sort of giant brain in a jarOH WAIT WE GOT THAT TOO. 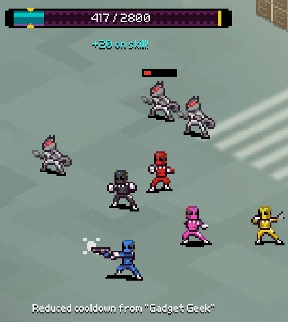 Chroma Squad is essentially broken into two parts... your studio, and your combat. At your studio, you'll spend budget to unlock new upgrades, equip and outfit your cast either through crafting or purchasing new items, respond to fan mail and so on. When you hit the record button, you'll be taken to wherever the episode is filming and given director instructions to maximize audience attention, like performing a certain type of attack, or using a specific character to take down the boss. Combat is turn-based, with each character being able to move and attack in a limited range. While you usually start out as "ordinary teens", at a certain point you can transform into your super squad and gain access to all your abilities and extra strength. Just make sure you play to your audience... do something stupid, like use a finishing move too early or on a weak minion, or let a character get taken out, and your viewers go down. Less people watching means less money in your pocket, after all. 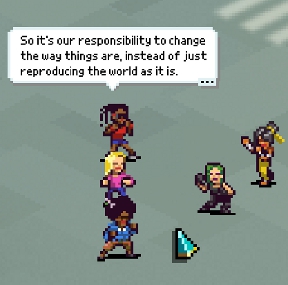 Chroma Squad is one of those games that just feels like a knock at the door of your childhood... it's campy and silly, but also smart and strategic, with an appealing self-awareness as it lovingly parodies the genre it's inspired by. There's a little bit of Game Dev Story in it too as you watch the compliments (or complaints) from your fans come rolling in and do your best to make each episode as flashy as possible. You can customise your team cosmetically to a surprising degree, from the men and women (or any combination thereof) who comprise it, to their names, colours, what the squad is called, what they yell on a finishing move, and more. If you grew up watching shows like Power Rangers and loved them, then Chroma Squad is going to feel gleefully indulgent. The fact that it looks and sounds so great with its bright pixel visuals and retro soundtrack is just the icing on the cake. While some of their well-intentioned statements on diversity and equality come off as a little wooden, it's a great sentiment to see incorporated. You know, amidst flip-kicking badly dressed pirates and dealing with the sneaky tricks of your former employer. 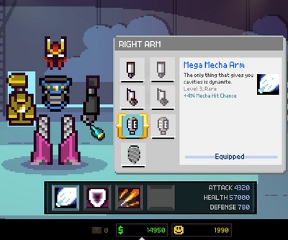 As to how it plays, well, Chroma Squad is just complex enough to make it meaty, without going into, say, Final Fantasy Tactics territory. Meeting some of the director's requirements for each level can require a fair bit of planning, and so can maximizing your viewers for each episode... heck, you can't even have your teens turn into your super squad at times unless your audience is at a certain level. That's not to say it's entirely smooth sailing... setting up acrobatics from teamwork can feel a little fiddly as you try to learn who needs to be standing where, and how far away, and some battles can drag on with how often characters and enemies get knocked around the screen. It's the sort of thing that might be a bit too casual initially for hardcore tactical RPG fans, but is still satisfyingly robust with a lot of customisation and wonderfully silly story scenes to unlock. The game actually branches its story as you move through the seasons, so depending on your decisions, you can wind up seeing an entirely new set of episodes/levels, giving the game a lot of replay value. Chroma Squad is, simply put, a joyous send-up of everything fans love about the genre and an engaging, bright squad-based strategy RPG that feels cozy and welcome like Saturday morning cartoons. With piles of content, easter eggs, options, and surprises galore, it's everything your inner child ever wanted.