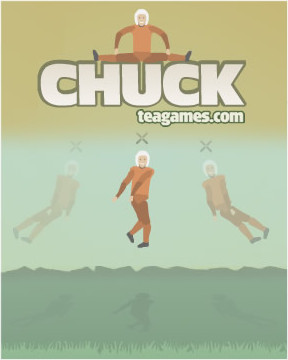 What might possibly be the very first new game of the new year, David Thorburn has just released his latest game, Chuck, on his Teagames.com website in the UK. The veteran game developer is responsible for BMX Backflips and other fun-filled Flash games that make use of impressive physics implementations in their Web-friendly game engines. And Chuck appears to honor that tradition with the remarkable ragdoll physics it features in the game's title role.

The game itself is a hodge-podge of 4 different events sewn together by a thread of gameplay: tossing Chuck around to score points. You are given three opportunities with each event to add to your score.

The first event has you throwing Chuck as far as you can with the mouse. Press and hold the space bar to wind up, then release it to send Chuck flying. It will feel very natural to do this, so much so that it may scare you.

The second event aims a cannon at a distant target that you cannot even see. Try your best to guess the proper angle of incline for the cannon with the mouse, and press the space bar to shoot. Adjust and shoot again. Then once more.

The third is like the first, only you get to bank Chuck off a tree as you try to land him as close as possible to a flag pole. The fourth event has you tossing Chuck around in a box full of stars. Yep, you read that right.

Ok, so I'm not real enamored with the gameplay, but did I mention the ragdoll physics? As you may know, I am a sucker for good game physics as I understand the complexity involved in implementing good collision detection and collision reactions. David's implementation is almost mesmerizing, and it serves well to create an immersive experience due to how natural Chuck's arms and legs appear to flail about as you toss him around. So what if it's only eye candy? David Thorburn has created a remarkable ragdoll physics demonstration in Flash, disguised as a game, and that's good enough for me. Click.

Hey jay if u like "ragdoll" games check out this link

To "To jay",
That Namzorg site is pretty fun!

the best ragdoll game i have ever played, is ragdoll fighters, you can download it here http://www.rf.treesoft.dk/download.asp

The funniest ragoll game i have tried is ragdoll masters... http://www.ragdollsoft.com/ so simpel and yet so funny ^^