Chuck's Challenge 3D is Chip's Challenge for the 21st century. Created by Niffler, a team of indie developers that happens to include the original creator of Chip's Challenge Chuck Sommerville, the multi-platform sokoban-like game takes the tile-based puzzles from the original release and updates it for modern players. You'll still deal with slippery ice floors, falling platforms, enemies marching back and forth, and a large supply of items to collect before you can open the door. But now you'll do it with full camera control and lots of pretty visuals! 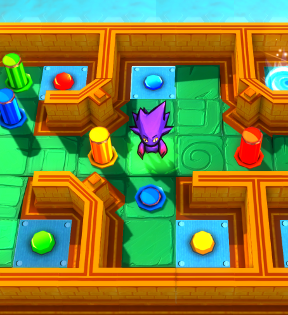 The premise behind Chuck's Challenge is a purple alien named Woop has come to Earth, shaken Chuck out of his vacation fog, and convinced him to make a game. Good enough excuse for us! The controls are confined to simple movements across the tiled board. You'll move from one area to another, flipping switches to manipulate parts of the environment as you try to unlock the exit. Simple in concept, but as you know, actually solving those puzzles is going to take some time.

Chuck's Challenge definitely feels like a sequel to Chip's Challenge. Fans of the original won't need convincing to give this one a try, but it's catchy enough to draw in new players without even trying. Over 125 stages to play, a level editor, weekly challenges, user-made puzzles to complete, and even hats to collect. The PC optimization for Chuck's Challenge 3D leaves something to be desired, but otherwise it's exactly what you would expect if Chip traveled through time and released a game in 2014.

Not 100% sure this was the culprit, but after downloading it I started to get loads of popups in chrome on my phone, and after I uninstalled it they stopped. Neither Avast nor Malwarebytes picked up anything untoward.