What happens when "happily ever after" is over? The business of the kingdom, of course. At least, that's what happens in Cindy's Travels: Flooded Kingdom. Cindy, known to the rest of the world as the glass shoe-wearing maiden before midnight, Cinderella, is now in charge of the affairs of the kingdom. When huge piles of junk begin to overtake the land, turning the countryside into a fairyland landfill, Cindy takes it upon herself to figure out what is causing the pile-up, and she gives the kingdom a good cleaning along the way. 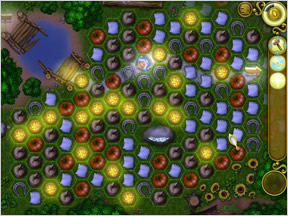 Using a match-3 system similar to games like Cradle of Rome and 4 Elements, make long chains of matches to clear a path for Cindy to her next destination. Each path in clearly defined, and that makes it easy to concentrate on the locations most in need of cleaning. You are not completely at the mercy of the chains, though. You do have your magic mirror, which will slowly charge as you clear chains of objects from the field. Once it is charged, a large chain will set off the magic, clearing all the objects in your vicinity, allowing you to move ahead along the path.

There are even more magical items that will help in your journey down your path. These power-ups will charge as you make matches on the board, just like the mirror. One of the most useful is the hammer, which destroys a single block in your path. Other power-ups include a magical spell that auto-selects any chain of 3 or more and destroys it, allowing you to find chains that you might not see. Yet another will allow Cindy to move two spaces along her path without clearing anything out of the way. These power-ups charge in a top-down order first. The further down the list, the stronger the power-up, and the longer it takes to charge between uses. So use them wisely.

The match-3 levels are interspersed with a few different mini-games that Cindy will encounter on her journey. You will help Cindy move logs off of her path, Rush Hour style; as well as find hidden objects using an overhead view. These serve to add a bit of variety to the game to keep things feeling fresh and compelling. Make it down the path through the levels and solve the mystery of the growing garbage in the kingdom. 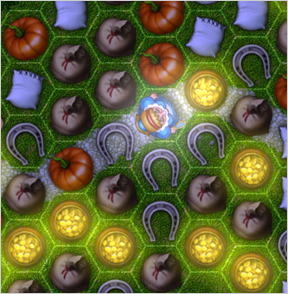 Analysis: There seems to be a growing trend in the match-3 genre toward gameplay that uses the matching mechanic for a greater purpose. It's not just about clearing the entire board of tiles anymore, but about creating paths through the play field, for example. These new sub-genres, if executed well, may breathe new life into an otherwise over-saturated genre.

The mini-games in Cindy's Travels are fun and well-implemented. They feel more like they are a part of the game as a whole rather than tacked on at the end in an attempt to add variety. The presentation is tightly integrated and there is no shift in perspective, graphic style, or control mechanics. The transitions from match-3 to mini-game and back again is flawless, and pulls you right into the story.

The graphics in Cindy's kingdom are lush and colorful, with detailed objects and easy-to-recognize bits and bobbles that must be located in the hidden-object levels. The character designs can look a bit odd when viewed from the top, especially with the females. Nothing that's not family friendly, but just kind of odd in appearance. I especially like the levels that take place at night, with items that glow, giving the whole scene a nice, almost magical feeling.

With a solid story and hours of gameplay, Cindy's Travels: Flooded Kingdom is a welcome addition to the match-3 genre. While character perspective may take a bit to get used to, it certainly doesn't detract from the fun packed into this title. Take up Cindy's mirror, clear the land of refuse, and get back to the business of "happily every after."

I love these kind of games

for the first time in ages, I've actually purchased a game! I really like this one. I like the various games within the game, the snake shooter type, and the hidden object bits. It's a nice change of pace.

I like everything in this game. It's not boring at all and very addictive, so after an hour of gaming I said: "Want more!" and bought the full version.
What's great in this game is its vivid graphics, various gameplay and a lot of puzzles. I was impressed with the attention to detail. Super!