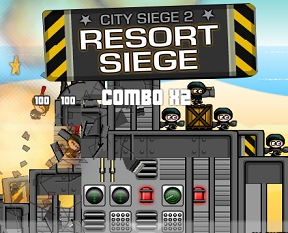 Hot on the heels of the news about a certain special forces unit and their now-infamous raid comes a cute little platformer/turn-based shoot-em-up action thriller that allows the average gaming Joe (or Jill) to attempt to emulate Seal Team 6, or, at least, some other Seal or Green Beret team in a mission of utmost importance that doesn't actually involve known, wanted terrorists. Created by thePodge Games, City Siege2: Resort Siege lets you create your own fabulous team of warriors and sends them on exciting missions in an unnamed (and rather fragile) resort city to rescue the good guys, wipe out the bad guys, and create as much havoc and destruction as possible while doing so.

Gameplay begins with a handy tutorial and one single soldier, a private with a rifle. Control your soldier's movement with the [WASD] keys and control the shooting with the mouse and a simple point and click. Your objective, should you choose to accept it, is to clear the screen of all of the bad guys while rescuing any VIPs, picking up as many stars as possible, and trying not to kill too many civilians along the way. Each time you complete a mission you gain both money and stars which can be used to buy new types of soldiers or equipment such as bazookas, tanks, helicopters, and even a lady spy who can sneak up on the enemy and plant bombs. Use the stars to upgrade your soldiers and watch them progress through the ranks and gain speed and killing power. Eventually you will have enough soldiers to form a team of five to assault a level, and switching between soldiers is as simple as clicking on them individually or using the number keys from 1 to 5 to switch it up depending on the situation. 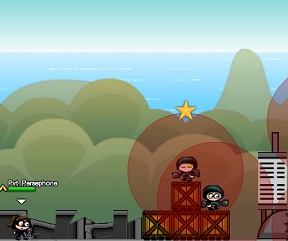 Along with convenient scenery which you can jump over or around or even conceal enemies, are buildings, garages, beaches, and the like which can have both somewhat expendable civilian hostages, certainly not expendable VIPs, and hostile soldiers who at first are conveniently looking the other way, allowing at least the first shot if you can manage that to hit them in the back. Perhaps not Marquess of Queensbury rules to be sure, but war is...heck after all, and it's get the bad guys before they can get you. Also concealed in the scenery are sandbags, some wrapped in barbed wire, and other items such as fuel drums and nuclear material that, if shot, can cause some spectacular explosions and damage to the surrounding structures. But be warned about going all Rambo on the explodables; while some civilian casualties are considered acceptable despite costing you money in "reparations", VIPs can be lurking nearby and if they die you cannot clear the scene and must start over from scratch. You can also kill your own soldier if they are too close to the explosions or collapses. Later as you gain more money you can buy add ons such as an air strike which wipes out everything in a given area, extra medical supplies to heal your little soldiers on the go, and mechanics who can repair your armored items such as tanks and helicopters.

With 30 levels of screens to clear and three slots in which to save games City Siege 2: Resort Siege offers a lot of replay value. Go back to replay levels to get that elusive perfect gold medal score or to rack up enough money to build up a very impressive force with which to take the later, tougher scenes. You will get a mission briefing at the beginning that includes a handy small map showing the general terrain and the locations of both VIPs and bad guys, allowing you to make decisions about which five soldiers/pieces of equipment are best for that level as well as a general idea of what you will run into enemy-wise.

With its cute, cartoony visuals, throbbing music track, fast-paced action, and Super Mario-like platforming City Siege 2: Resort Siege is a wild ride through the world of special ops and hostage rescue. So while you can't be a member of Seal Team 6, which doesn't actually exist, anyway, try City Siege 2: Resort Siege and live out your wildest commando team fantasies of saving the day, killing the bad guys, and reducing some random unnamed resort to complete rubble.

This game was a lot of fun - I guess part of me really enjoys mindless explosions and collapsing city blocks on top of enemies :)

I found that gameplay was unbalanced though, and some might say 'broken' with the right strategies.

The Spy unit is overpowered - currently the easiest way to get a perfect score on a level is to send in the Spy as far as possible (she can't be detected unless she enters the red awareness circle AND appears in front of an enemy) to extract all civilians and VIPs. This can often be done without any further support as the Spy jumps higher and avoids enemy fire quite easily. The Spy's bombs are also able to hit enemies from just outside their awareness circle (!). Once the ground is clear, send in your Commando or Heli-R to destroy everything in sight.

Alternately, a single Commando unit can take on everything (even Helis) by firing from more than one screen length away. At this range the enemy units are unable to see your Commando and will just absorb damage. Civilians and VIPs are also immune to friendly fire (!) which makes this approach nearly foolproof.

I like this game, and the first one, but while it's fun there's never any tension. It's easy to run to safety, and I only ever lost rounds by accidentally killing the VIPs. Keeping my troops alive wasn't a challenge in any way.

A "platformer/turn-based shoot-em-up action thriller?" Wow. I didn't even know it was possible to be in that many genres.

Lots of fun, but the performance turned *horrible* after a while. I'm talking refresh rate dropping below 1 frame per second. And this is on my work machine, which is pretty turbocharged and copes fine with any other Flash game I've thrown at it.

I was suspicious for a while before that: how badly implemented does your level design have to be that it takes four slow passes to generate a tile-based level that's only a few tens high and a couple of hundred wide? Well, it turns out there's a somewhat gratuitous jelly-physics engine holding together bits of the buildings. My guess is this is what made the refresh rate drop to an utter crawl. (And no, adjusting the quality didn't help.)

It's a pity, because it's otherwise a delightful little game, with strategies (stealth, caution, guns-blazing, tank assault, heli assault) and counter-strategies (each of the above have configurations of specific enemies that make them distinctly suboptimal).

Still 4/5 shrooms despite the performance atrocity.

It turns out the performance problems can be dealt with by refreshing the game, which doesn't lose your progress. It's still absurd - performance starts to degrade after about 6 or 7 levels, and gets unplayable around 10 levels in - but at least there's an easy workaround.