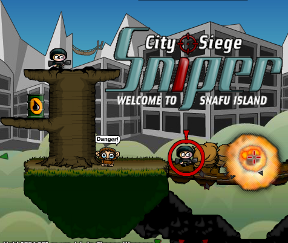 The Baddies are back to threatening innocent civillians in City Siege Sniper: Welcome to Snafu Island, an action shooter from The Podge. But this time it's up to you, a lone sniper, to take out the Baddies from afar using a wide array of weapons.

You start out with a rock, a handgun and a sniper rifle to your name. Your goal is to save as many civiians as possible. Use your mouse to aim and shoot your chosen projectile, [spacebar] to take cover and to change weapons, and [arrow] keys or [WASD] to scroll across the map. Throwing stones can distract the soldiers, allowing some civilians to run away. Other innocents are standing too close to the soldiers to run. You have to take these Baddies out more carefully, otherwise they will shoot at you or at the civilians. If you attract unwanted attention and start getting shot at, hold down the space bar to duck out of site. They'll soon stop shooting and you can get back to sniping. Once all the civilians are safe, pull out the big guns and blast away all the Baddies. After each level you're awarded stars and cash depending on how well you did. Use the cash to upgrade your current weapons, buy ammo, or to purchase new weapons. Stars are used to unlock new levels.

City Siege Sniper is different from the other City Siege games in that you are in first person view. Instead of recruiting soldiers for your cause, you get bigger and better weapons to take out the bad guys. The game still features the same large-eyed soldiers you have come to know. The revamped gameplay has turned it more toward the puzzle genre and away from a platform game. It's great fun once you've saved everyone to cause the biggest explosions you can to rid the screen of enemy forces. Because the civilians won't mind you blowing up their city as long as they're safe, right?

When I tried this on ArmorGames, it wouldn't save my progress when I played it on Google Chrome. Has that bug been fixed?

Also, what do I have to do to earn more money on missions? I rescue all the hostages, I take down all the baddies with as little of my blood shed as possible, I'm stumped.

We've been having a few reports about things not being saved in Chrome. For some reason Chrome seems to some times block flash shared objects, we're not sure why.

We've tested the latest version of Chrome with the latest Flash player and had no luck reproducing the problem. We have noticed that settings in Chrome relating to Cookies (block cookies, delete cookies when I close chrome etc.) also affect flash shared objects. It's possible that your Firewall or Antivirus/Anti-spyware software might be having this effect as well and we've heard that Rapport (security software supplied by many banks) also causes issues with Chrome and Flash.

We're really not sure what the problem is - there is only one way to save a shared object in flash so I don't think this is within our control, but we're still looking for possible solutions.

Also, to get better scores, go for bigger combos!

Ugh, mine's from a few days ago did not save either!

No biggie, as I love this game and the designer (the siege series was fantastic).