Claustrophobium - In Four Steps From Death

In OneGoodGame's creepy-weird turnbased puzzle game Claustrophobium - In Four Steps From Death, you play a happy little worker who suddenly becomes a lot less cheerful about his job when his shadowy, evil boss orders him to work in the even shadowy-ier and evil-er warehouse. Is the way the walls seem to be so very toothy and close in around you purely a product of your freaked out mind? Well, then how do you explain the spike traps? Or the ghosts? Man, this is what happens when you take shady jobs on Craigslist. Use [WASD] or the [arrow] keys to move, and the [spacebar] to pick up or put crates down. The goal in each stage is to reach the stairs to the next level, but the catch is that every four steps you take, the walls literally close in on you, and if you're caught and crushed, well, you'll need to start again. Every move counts as a result, especially when spikes and switches and other obstacles become a factor, so plan your path, and keep your eyes out for little green orbs that will give you an extra move. 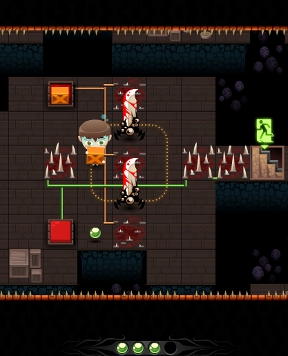 While it's a good idea, Claustrophobium feels like it's missing a few mechanics and a bit of work here and there that hold it back. Since the game is turn-based, being unable to undo a move rather than restarting the whole level can be extremely frustrating, and that's compounded when the [spacebar] doesn't always pick crates up immediately. Figuring out the rules also requires a little counter-intuitive experimentation... you can move forward onto a dangerous square, for example, as long as that same move would also result in the threat moving out of your path, such as spikes retracting because a monster would press a switch at that same time, or the monster itself vacating the square as you're moving into it. With a little patience, however, Claustrophobium slowly becomes a very clever and stylish puzzle game. Its design is top notch, with clean lines and vibrant colours making the freaky and grotesque appealing to the eye, and creative enemy sprites add a lot of personality. Levels tend to be small, but no less carefully crafted to provide a challenge, especially once more elements are added in later on. Claustrophobium - In Four Steps From Death is a little clunky in a few places, but beneath that is a solid puzzler with a great sense of style.

Finished it, not too complicated, but a nice new twist on a few old favorites.

Seems all the levels are solvable.

Sorry you're having problems! I haven't played this since I reviewed it, and I just checked... my progress is still saved!

I'm a bit confused. After beating what turned out to be level 29 of 30, I went to the main menu to see how many levels in I was. Everything was unlocked, so I clicked to play level 30. When I beat it, clicking "Next" just booted me back to the menu. Was there supposed to be any sort of ending?

As for the gameplay, I don't think it's hard so much as mischievous. There are a lot of puzzles where it looks like you're supposed to do something obvious, but you'll keep narrowly dying until you figure out to do the exact opposite. Every time a new mechanic is introduced, it tries to make it so that you'll die rapidly unless you recognize the mechanic, so the really counterintuitive solutions are gated behind simpler puzzles. I had a lot of fun with it.