Originally released as a browser game in 2009, Tyler Glaiel's Closure was a stunning bit of puzzle platforming that wove its surreal narrative through a series of brilliant light manipulation puzzles. In short? That game was cray. Now, as part of the awesomely named Eyebrow Interactive, Tyler gives his work new life in this reworked and remastered indie download release of Closure, which is more than a simple visual upgrade. Travel through three worlds and three minds as a light-bearing spider creature that connects them all from within a dark world, solving a series of increasingly complex and masterfully designed puzzles. Dark, gorgeous, challenging and engrossing, Closure is an absolute stunner you'll want to explore from top to bottom. 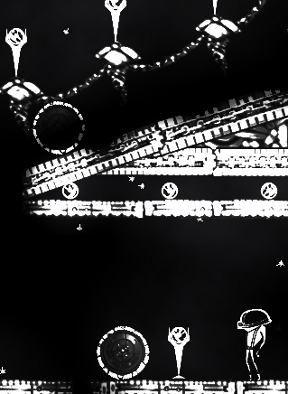 Though initially you'll be stuck as our little spider hero, eventually you'll open up a main hub through which you can access all of the different stages, each of which has a very different setting and star. Use the [arrow] keys to move, the [S] key to jump, and [A] to pick up and drop light sources, or turn lamps to aim beams of the stuff around. Light, as you'll soon discover, is extremely important since it has the power to drastically change your environment. If part of the floor lays in shadow, it literally isn't there, turning a place you could previously have run across into a dangerous drop. This isn't necessarily a bad thing, however, since through the clever manipulation of light you can make pathways through solid objects by changing where the shadows fall. This even applies to water, so think twice before you dive into its shadowy depths. (Like I didn't already have enough of an irrational fear of deep water... thanks a lot.) To get to the door at the end of each stage is usually a short jaunt, but requires a lot of careful thinking and planning to shift shadows in your environment to get there. If you get stuck, you can just hit [R] to restart the level. 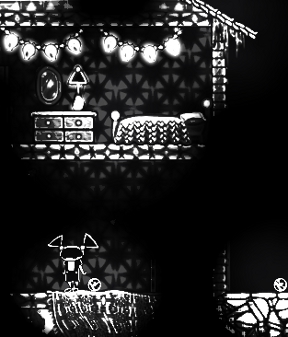 Analysis: Though it keeps a lot of the same concepts from its 2009 inception, Closure is more than a simple remix. The whole game and all its levels are brand new, and fairly substantial to boot, especially if you want to track down all the things you need for 100%. It's really impressive how small and self-contained the levels can be, yet so cunningly designed as to allow the use of light and shadow to make a relatively simple landscape into a challenging puzzle. Closure is full of "a-ha!" moments that make you feel proud of yourself for spotting the solution, but it always comes with a healthy dose of admiration for the designers, who have done a remarkable job here. Speaking of remarkable, good gravy did Christopher Rhyne work some serious audio mojo with the soundtrack. He might be some sort of dark wizard, but man, we're willing to let it slide as long as he keeps doing such amazing ambient, atmospheric work like he does here, tracks changing in subtle ways to draw you in.

If there's any place that feels like it isn't quite as tight as the rest, it might have to be the story, which is simply so ephemeral throughout the gameplay that for large stretches of time it seems like it's barely there at all. So much of it is just implied and gleaned from the surroundings, which is great for fans of subtle exposition, but may frustrate players who prefer a storybook approach to narrative that clearly states what it means. It's hard to really complain about, however, since the game itself is just so darned good. Beautiful, too, with detailed environments blooming into existence around you as you move light sources and catch glimpses. Closure is recommended not just if you like solving puzzles, but if you like thoughtful, well-made games period, and the talent and dedication of its team shines through in every aspect. As a puzzle platformer, Closure is good. Fantastic, really, and full of the sort of cleverness that reminds you there's still plenty of innovation to be made in games.

Actually, it is available for Mac on Steam. My MacBook and I devoted Friday night to it :)

Wanted to make sure everyone knew the browser version of the game isn't the same as the download, which is newer and updated and cooler and stuff.

I downloaded this game from PlayStation Network (PSN). I enjoyed the browser version but glad that this version is different just because it has all new levels.